Arizona’s USL team has changed its name for third time in five years, this time from Arizona United SC to Phoenix Rising FC. The move follows an ownership change earlier this year and coincides with the announcement of plans to develop a 15.8-acre soccer-specific training and 5,000-seat stadium facility on tribal land bordering the cities of Tempe and Scottsdale. 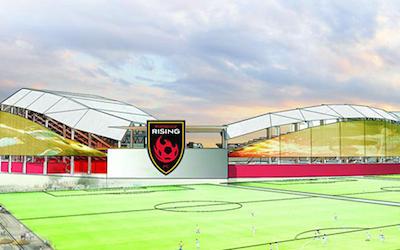 The Arizona USL team has bounced around the Phoenix area since its launch in 2013 when it played at three facilities -- Arizona State's Sun Devil Soccer Stadium, GCU Soccer Stadium and Reach 11 Soccer Complex. After changing owners and name after the collapse of Phoenix FC, Arizona United went back and forth between stadiums in Peoria and Scottsdale.

Phoenix Rising FC plans to kick off the 2017 soccer season at the new complex.  All USL teams will be required to have facilities with a minimum of 5,000 seats in 2017.

“We are thrilled to announce this new era for professional soccer in Arizona,” said Phoenix Rising FC governor Berke Bakay. “These planned investments should serve as proof that we are serious about creating a successful soccer franchise in our state. We seek to prove that the Valley of the Sun can deliver a successful United Soccer League team and eventually compete at the highest levels of soccer.