Chapecoense, the Brazilian club that never tired of climbing

On Monday night came the horrible news of another plane crash involving a soccer team.

Brazil's Chapecoense was en route from the Bolivian city of Santa Cruz to the Colombian city of Medellin for Wednesday's first leg of the Copa Sudamericana final against Atletico Nacional when its plane crashed in the mountains of Antioquia province. El Gordo hill, outside the city of Rionegro, was just 17 miles from Medellin. 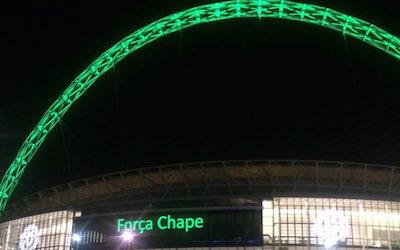 Of the 77 on board, six survived: three players, one journalist, one flight attendant and one flight technician.

The Air Force plane carrying the Zambia national team in 1993 crashed into the Atlantic Ocean, off the coast of Libreville, Gabon, the second of three scheduled stopovers on a flight that began in Lusaka and was scheduled to end in Dakar, where the Chipolopolo (4-0 winners over Italy in the Olympics just five years earlier) had a World Cup 1994 qualifier slated against Senegal.

The cause of the crash is unclear with conflicting reports that the plane suffered from electrical failure and that it ran out of fuel. The latter would be consistent with aviation reports that the plane's range was 1,600 miles, the exact distance from Santa Cruz to Medellin. The plane's landing was reportedly delayed as the Medellin airport dealt with another emergency.

In the late evening, messages of support and prayers began to come in from around the world as everyone waited for news on survivors. By morning, there was confirmation from rescuers on the ground. Three players -- Alan Ruschel, Jakson Follmann and Neto -- survived. Danilo, the 31-year-old goalkeeper and hero of Chapecoense's Copa Sudamericana -- survived the crash but later died.

The messages turned to condolences. Chapecoense is a "Cinderella dream ended tragically," tweeted Samantha Power, the U.S. ambassador to the United Nations -- one of the great stories of Brazilian soccer, a sport in need of them after years of failure on the field and rampant corruption.

The Copa Sudamericana -- in which MLS's D.C. United played in 2005 and 2006 -- is the second of South America's two club cup competitions -- Conmebol's Europa league, if you will -- but qualifying for the final amounted to the biggest achievement in Chapecoense's short history.

"They never tired of climbing and now they're in heaven," a young fan wrote on a poster displayed outside Chapecoense's tiny stadium.

The club was of modest means, but strong fiscal management made it a model for Brazilian pro soccer and allowed it to punch above its weight. In its third season in Serie A, Chapecoense was in the top half of the league -- 9th place -- with a game to play.

The federation of Brazilian clubs issued a statement that they would offer Chapecoense players on loan free of charge for the 2017 season and exempt the club from relegation for three years. Atletico Nacional asked that Chapecoense be declared the Copa Sudamericana champion and awarded the prize money from the final.

"What was supposed to be a celebration has turned into a tragedy," Medellin mayor Federico Gutierrez.

Brazilian president Michel Temer declared three days of mourning. Mourners from the city of Chapeco, a city of 200,000 located in the remote interior of Santa Catarina state, gathered at its tiny stadium to pay their respects. One of the most heart-breaking pictures was of three Chapecoense players sitting in the team locker room, players who missed the trip because they were injured.

Matheus Saroli, the son of Chapecoense coach Caio Junior, missed the flight because he forgot his passport.

"We need strength and I ask that you give us a little privacy, especially my mother,” said Matheus Saroli in a message posted on Facebook.