The Nike International Friendlies tournament, launched in 2001 for the U.S. U-17 boys national team, has long provided early glimpses of future stars. In 2008, a 16-year-old Neymar played for the Brazil team that in Lancaster, California beat a U.S. team that included Juan Agudelo. Coutinho, the current Liverpool star, scored twice in Brazil’s 3-0 win.

This year’s Nike International Friendlies kicked off in Lakewood Ranch on Wednesday and the U.S. U-17s, coached by John Hackworth, started with a stunning 7-1 win over Portugal in which Missouri product Josh Sargent  hit a hat trick.

The USA opened the scoring in the 8th minute with an Andrew Carleton penalty kick. The Atlanta United Homegrown signing scored again in the 37th minute and set up Ayo Akinola’s 63rd-minute goal. 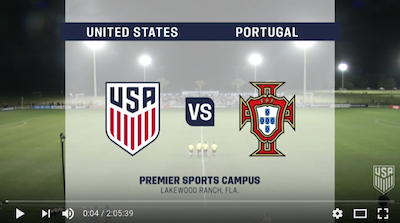 "If you look at the scoreline it might not be a fair indication of that game," said Hackworth. "Portugal is a very good team. We capitalized on a lot of very good opportunities but they were dangerous as well. Getting that third goal that Andrew Carleton got was a bit of a relief because we were defending a lot before that. And then in the second half we made some adjustments and I think we handled their press and played through it, and obviously got goals to put the game away."

The last time they met, in Mexico City in August at the Torneo de Naciones, the USA and Portugal tied, 3-3.

The win puts the USA in first-place of the four-team round robin competition with a better goal difference than Brazil, a 4-2 winner over Turkey, the USA’s next opponent on Friday*. 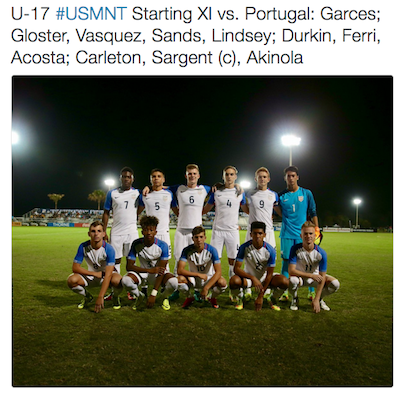 The U.S. U-20 men's national team's quest to qualify for the 2017 U-20 World Cup will begin with first-round group play against Panama, Haiti and Saint Kitts & Nevis at the Costa Rica-hosted 2017 Concacaf U-20 Championship that kicks off in February.

Panama finished runner-up to Mexico -- after a PK tiebreaker in the final -- at the 2015 Concacaf U-20 Championship in Jamaica while the USA qualified with a third-place finish.

"In general, the draw is a good draw," said U.S. coach Tab Ramos said. "Obviously, we always have to consider that these are all young players. In terms of the teams we drew this time, Panama we can't forget was probably the best team in the last U-20 qualifying tournament, so we know they're going to be strong. Haiti is always difficult because they are a team with a lot of athletic and skillful players, so they can get you in a number of different ways. Saint Kitts & Nevis is obviously an up-and-comer. I frankly don't know a whole lot about them except that they have changed a lot in their development and now they're getting some dividends from that.

“Haiti is always difficult because they are a team with a lot of athletic and skillful players, so they can get you in a number of different ways. Saint Kitts & Nevis is obviously an up-and-comer. I frankly don't know a whole lot about them except that they have changed a lot in their development and now they're getting some dividends from that."

Costa Rica, the USA and Mexico were seeded in the first-round groups. The 2017 U-20 World Cup will be held in South Korea May 20-June 11.

USA aims for third place at U-20 Women's World Cup

Having lost, 2-1, in overtime to North Korea in the semifinals, the USA faces Japan for third place at the 2016 U-20 Women's World Cup in Papua New Guinea (Saturday, 1 a.m., FS1 and Telemundodeportes.com/PT: Friday 10 p.m.). France, which the USA played to a scoreless tie in its opener, meets North Korea for the title (Saturday, 4:30 a.m. ET on FS1 and NBC Universo).

"The emotions that these players have felt over the last 24 hours have been pretty intense," said U.S. coach Michelle French. "The way that they've come out of that 24 hours and the energy and excitement that they have going into the Japan game is tremendous. They know that this is last game they will be able to play together and they are excited to step out on the field and show what they can do as a group."

Japan and the USA have met twice during this U-20 cycle. The Japanese won, 5-0, May 27 of this year in a friendly in Papua New Guinea and 3-0 on June 2, 2015 at the NTC Invitational in Carson, California.

"Even though we aren't playing in that final, I think that we can still grow and learn so much from the third-place game," said goalkeeper Casey Murphy. "We are going to treat it as a final and we can't wait to play our best soccer of the tournament against Japan."