Big U.S. U-17 wins a 'snapshot of good signs of progress'

Last August, at the Torneo de Naciones in Mexico, the U.S. U-17s fell, 6-3, to Mexico after taking a lead in the second minute and being tied, 2-2, at halftime, tied Portugal, 3-3, and beat Qatar, 2-1. Afterward, U.S. coach John Hackworth said the performances demonstrated that the U.S. national team program's emphasis on attacking play had been paying of. "But if you don’t defend well it doesn’t matter how good your attack is sometimes,” he said.

During three games over five days last week at the Nike International Friendlies in Florida, Hackworth's team impressed in every area of the field. His U.S. U-17 boys scored 15 goals combined against Portugal, Turkey and Brazil and conceded only two goals -- a terrific three-game run by the team that is preparing for the U-17 Concacaf Championship hosted by Panama April 21-May 7 to determine the region’s qualifiers for the 2017 U-17 World Cup. 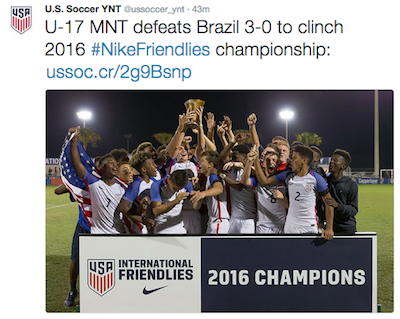 “I was in this job previously in my career and I’ve talked about it a lot, our soccer and tactical understanding are getting better,” said U.S. coach John Hackworth, who guided the USA at the 2005 and 2007 World Cups and returned to the helm in 2015.

“The players are technical enough now that we can play against the best teams in the world and in some cases, not only compete with them on a technical and tactical side, but be successful like we were this week. I don’t like to put results and development together as one, but it is an important part of the process that you learn how to be successful, in these games and tournaments.

“We work very hard, but with the idea that we’re going to get better individually and with the idea that collectively, as a team, we are going to be able to go and compete. It’s everybody at U.S. Soccer, especially from the Development Academy to the youth national teams, that we believe we can be successful in a World Cup one day. We are very connected in that goal and I just think in this little snapshot that you see some good signs of progress.”

The USA clinched the title at the U-17 Nike International Friendlies with a 3-0 win over Brazil after victories over Turkey (5-1) and Portugal (7-1).

Ayo Akinola, Josh Sargent and Timothy Weah scored in the win over Brazil, which had beaten the USA 4-1 and 3-0 in the last two editions of the Nike Friendlies. The last U.S. win over Brazil came in 2013 when Christian Pulisic was the MVP. 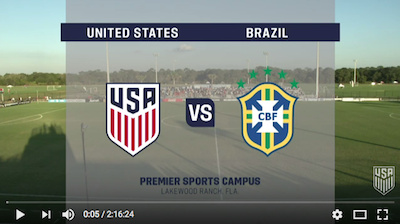 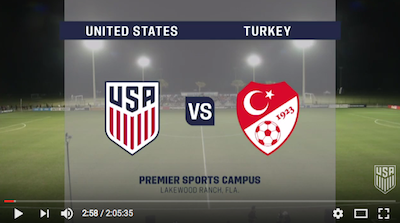 U-19 national team player Brandon Vazquez, who scored two goals for the USA at the 2015 U-17 World Cup, has been signed by MLS expansion club Atlanta United from Club Tijuana.  Vasquez, a Southern California product, is the fourth teenager signed by Atlanta United after current U.S. U-17s Andrew Carleton and Chris Goslin, both 16-year-olds, and 18-year-old Ghanaian Jeffrey Otoo (18).

Vazquez is the second player from the 2015 U-17s to sign with an MLS team after the Philadelphia Union's Auston Trusty. Two of their U-17 teammates have already debuted in major European leagues, Christian Pulisic at Borussia Dortmund and Josh Perez at Fiorentina.

Japan outshot the USA 29-3 while beating the Americans 1-0 in the third-place game at the U-20 Women’s World Cup in Papua New Guinea.

The USA won two games during its fourth-place finish, beating New Zealand, 3-1, in group play and Mexico, 2-1, in the quarterfinals before losing to North Korea, 2-1, in the semis. It opened with a scoreless tie to France and tied Ghana, 1-1, in its final group game.

Coach Michelle French’s team was outshot by each opponent besides New Zealand.

North Korea beat France, 3-1, in the final to lift its second U-20 Women’s World Cup. 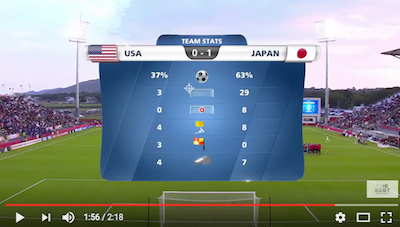 In the third-place game, U.S. goalkeeper Casey Murphy made seven saves and the Americans held off the Japanese until Mami Ueno chipped the ball over Murphy in the 87th minute from two yards inside the left side of the penalty area into the far corner of the goal.

Japan had 63 percent of the possession.

"Anybody that watched the games knows that Japan is absolutely world class," said U.S. French. "Being able to track and manage their movement off the ball is something that's very difficult. We did our best. I couldn't be more impressed with Japan as a team, but on the flip side our players took every single punch that they threw until that goal at the end. We almost found a way, as we've done all tournament, to get a goal and get back in the game."