Pulisic, amid $30 million transfer rumors, forges on with Dortmund

Borussia Dortmund’s 2-2 tie, in which 18-year-old American Christian Pulisic started, with Real Madrid at the Bernabeu earned Dortmund a first-place finish in Group F of the UEFA Champions League. Dortmund also broke the record for most goals scored in the UCL group stage. 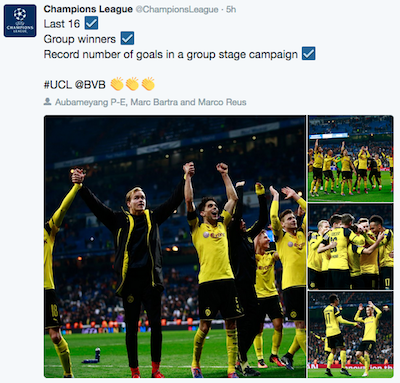 Pulisic played in all six of Dortmund’s Group F games, starting in five and famously coming off the bench in Dortmund’s first game against Real Madrid to set up the equalizer of their first 2-2 tie.

On Wednesday, Real Madrid took a 2-0 lead in front of 79,500 home fans on two goals by Karim Benzema. Dortmund pulled within one on Pierre-Emerick Aubameyang's goal in 60th minute, shortly before Pulisic was subbed by Marco Reus, who scored the equalizer in the 88th minute.

It marked the first time in 14 years that a team overcame a two-goal deficit against Real Madrid at the Bernabeu.

Reus’ strike ensured Dortmund the group win over the Champions League defending champion and marked its 21st goal of the group stage. The 21 goals beat the record of 20 held by Manchester United (1998-99), Barcelona (2011-12 and this season) and Real Madrid (2013-14).

The Champions League draw for the round of 16 takes place on Monday in Nyon, Switzerland.

The seeded group winners go into one pot and the runners-up in another. The seeded teams cannot face a team from its own group or same nation. Which means Dortmund’s opponent for the first leg of the round of 16 on Feb. 14 or 15 will be Paris Saint-Germain, Benfica, Manchester City, Porto or Sevilla.

Going into the 2016-17 season, there were questions over whether Pulisic, who debuted in the Bundesliga the previous season at age 17 and played nine games, would get much playing time, because Dortmund spent more than $100 million on new talent. But besides appearing in every Champions League game, Pulisic has played in 10 of Dortmund’s 13 Bundesliga games, scoring twice and assisting on four goals.

Before Wednesday’s game against Real Madrid, rumors swirled that Pulisic, who has a contract through 2019, was being courted by other clubs, big time.

Liverpool coach Jurgen Klopp, who was at Dortmund’s helm when Pulisic signed his pro contract in 2015, is looking for reinforcements during the winter transfer window and according the Daily Mail Liverpool is willing to spend more than $30 million on a transfer fee to get Pulisic.

Also interested in the Pennsylvania product, according to the rumor mill, are Tottenham, Arsenal and Paris Saint-Germain.

How reliable these reports and the money figures are is difficult to verify. (Last summer, Dortmund reportedly rejected a $12 million offer for Pulisic.) But Dortmund Sporting Director Michael Zorc is on the record as saying a week ago that, “It's not worth the effort for Liverpool” to make a bid.

In early November, Zorc told Sports Illustrated’s Grant Wahl: “There have been some offers for him in the summer window from England and from German clubs, but we would like to have him here and develop him here. We didn’t educate him to sell him.”

Zorc added that Dortmund, which pays its players more than $3 million per year on average, is ready to renegotiate Pulisic’s deal.

The latest stage at which a U.S. product has seen UEFA Champions League action was in the semifinals, when DaMarcus Beasley played for Dutch club PSV. Whatever Pulisic’s long-term future is, expect him to be with Dortmund to aim for that milestone in 2017.