A strong case for high school soccer from Laura Kerrigan: 'Let's not have turf wars'

In our continued coverage of the debate over clubs that don’t want their players taking part in high school ball, a position supported by U.S. Soccer for its boys and girls Development Academy leagues, we hear from Laura Kerrigan, who coaches the girls and boys teams at North Carolina’s Cary High School, where she also teaches social studies.

Kerrigan is also the NSCAA State Technical Director for North Carolina, a member of the NSCAA Academy Senior Staff, and the 2012 recipient of the NSCAA Mike Berticelli Excellence in Coaching Education award. She previously served as head coach of the North Carolina State women’s team for more than a decade.

We had these four questions for Laura Kerrigan:

What criticism of high school soccer do you find particularly objectionable?

That the level of coaching is below that of club and it is not beneficial to a player to play high school soccer. There are many high school coaches today, especially in my area of North Carolina, who are very strong coaches.

I my case, I obtained a USSF "A" coaching license, as well as teach courses for the NSCAA. My focus is on development of players and the overall educational experience of playing the sport of soccer. My emphasis is more on developing the character and abilities of players, rather than on winning, a philosophy that is emphasized in the high school where I teach (Cary High School).

There are many club coaches who have a similar philosophy, but I am alarmed by how many club coaches are more focused on winning and touting which of their former players are playing Division I soccer, than on the developmental benefits of playing a sport.

What are some attributes of high school soccer compared to club ball?

There seems to be a lack of concern with some club coaches about academic performance and overall character development of players. Certainly, the club level is a higher level of skill than high school soccer, but many players in club are not put in leadership roles, and many languish on the touchlines during games because better players are getting most of the playing time.

In high school, these players take on more responsibility and many of them become strong leaders on and off the field. Moreover, they build a sense of identity and self-worth that is lacking in many club structures, which seem more and more to be centered around the club and coaches, rather than the players.

Many high school coaches are teachers, trained in educational psychology and pedagogy, and deal with all types of kids and situations every hour of the working day. Many club coaches are former players who have never taken a course in education. Coaching is teaching and the best soccer coaches understand this. They also understand that we are constantly learning and take advantage of opportunities to strengthen their coaching skills. 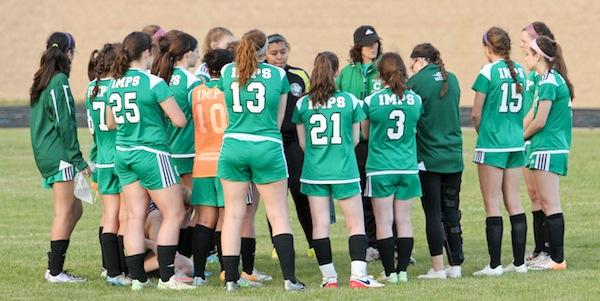 Also, high school coaches are paid exceedingly poorly so no high school coach I know is in it for the money, I can guarantee you that, at least in North Carolina. Many club coaches make quite a bit of money off player fees and tout their winning percentages and top players in obtaining raises.

The outrageous fees that clubs charge kids has made club soccer a country-club type sport in many areas of the country. If you want kids to learn how to accept and interact with people from all backgrounds, you have a better chance of that in high school than in club.

Are there any criticisms of high school soccer from U.S. Soccer and club soccer that you believe are legitimate -- and if so are there solutions to the issues they cite?

Yes, two major ones. First, there are too many games in a high school season. Two games a week is more than enough. There are some coaches who schedule three games in a week or due to weather make-ups, teams end up playing three games in certain weeks.

This is too much. It takes away from training time and also can lead to injuries. There should be at least one week at the end of the season put aside for make-up games and a rule that no team can play more than two games in a week. If games can't be made up without going to three games in a week, then so be it -- the game will not be made up. It is not the end of the world.

Second, some high school associations prohibit kids from playing any club ball during a high school season. This needs to end.

There can be a peaceful co-existence of high school and club, because they both serve important purposes.

Several of my players over the years have successfully played both club and high school. However, for it to work for the players, the high school and club coaches both must be flexible. There has to be an open line of communication with the player about how much soccer they are playing each week.

Overuse injuries can and have resulted when players feel pressured by either their high school or club coaches, and many times both or their parents, to play in multiple sessions per day or not take off days when necessary to rest and recover.

What is the problem if a kid misses some high school practices if they are training with their club team or if they miss a club practice to play in a high school game?

Really, all coaches need to take a step back and do what is best for the player, and I mean the overall player's development; athletic, academic and psychological.

Have you encountered situations where a player at your high school thought she might be better off forgoing the high school season?

Let me tell you a story about a student-athlete who played for my high school team several years back. During her junior year, the local club pressured kids at her level (she went on to play Division I soccer in college) to not play high school soccer. Players and their parents were pressured by threatening them with poor recommendations to college coaches if they didn't comply.

She came to just about every practice and every game, including away games on the bus, but did not play in the games so as not to violate her club's request. Why did she do all this? Because being on the high school team was part of her identity.

Her teammates were her friends in school and out. She also knew that I would stay on her about academics and other school situations, and wanted that.

Clubs coaches and administrators sometimes don't understand that -- all the essential extras outside of "skill level" that high school soccer brings to the table. Thankfully, the club scraped its rule ("request") the following year, but I have heard rumors of it coming back. I sincerely hope they do not do so, for the sake of the players.

Really folks, let's not have turf wars over players. Let's look at what is best for the players' overall educational and developmental experience. Isn't that what coaching is really supposed to be about?