In just over two months, Tab Ramos will aim to steer the U.S. U-20 men to the U-20 World Cup for the third time of his tenure.

In 2013, Ramos’ team was eliminated in the first round, but tied eventual champion France, for whom Paul Pogba  played, in a group that included eventual third-place finisher Ghana and European champion Spain.

At the 2015 U-20 World Cup, Ramos’ team reached the quarterfinals, falling in penalty-kick tiebreaker to eventual champion Serbia.

“This 97/98 team has a lot of potential,” said Ramos. “There are a number of individual players who have the potential to play a big role in the future on the senior national team. If we were able to add Cameron Carter-Vickers, Christian Pulisic and Gedion Zelalem to this group, it could potentially be the most talented team we have had in a long time. It is important that these players keep making progress physically and mentally.”

Both Carter-Vickers and Zelalem, with English Premier League clubs Tottenham and Arsenal, respectively, played in the 2015 U-20 World Cup. Professional clubs aren’t obligated to release players for youth championships, but because they aren’t currently first-team starters, Carter-Vickers and Zelalem are more likely to be at Ramos’ disposal. Pulisic is a regular at Borussia Dortmund, whose Bundesliga season ends May 20 and which is still alive in the German Cup and UEFA Champions League, whose finals are May 27 and June 3. The 2017 U-20 World Cup in South Korea takes place May 20-June 11.

Moreover, Pulisic is already a full national team starter and the USA has qualifiers against Trinidad & Tobago June 9 and at Mexico June 13.

“First we have to qualify,” said Ramos. “At the moment, I do not see it as much of a possibility that Christian will play, but that will depend on what Coach Bruce Arena would like to see from him and where he is in May with his club. Of course, Christian will have a say on that as well. As an example, Paul Pogba helped France win the U-20 World Cup three years ago when he was already a Champions League player for Juventus, so there is value to being a leader in your own age group.”

The next phase in preparation for the U-20 World Cup qualifying tournament hosted by Costa Rica Feb. 17-March 5 is a Dec. 13-20 training camp in San Jose, Costa Rica during which the USA will play the Ticos in friendlies Dec. 17 and 19. Ramos has selected a 20-player roster that includes seven collegians and 10 players with MLS clubs. The only collegians on the USA's 2015 U-20 World Cup roster were two backup goalkeepers.

In comparing the current U-20 pool against the previous two, Ramos says:

“This is a more consistent age group throughout our lines -- defenders, midfielders and forwards -- when we have everyone available. In the past we always seemed to have to fill big holes somewhere. This is great news, but of course in the end we also have to be able to suffer for each other, be tactically comfortable and play happy. There are no easy games when you get to the point when results are important.”

U.S. U-18 standout Nick Taitague of FC Richmond will be is making his debut with the U-20s on the Costa Rica trip.

The latest young Mexican-Americans amid the tug-of-war between the U.S. and Mexican national team programs are Ulysses Llanez of the Los Angeles Galaxy and Julian Hinojosa of FC Dallas, who were called into Mexico's U-16 camp last week. Both were on the USA's U-16 roster for October's Val-de-Marne Tournament in France, at which Llanez scored both goals in a 2-1 win over England. Last September, U.S. U-15 national team star Efrain Alvarez, also a Galaxy player, attended Mexican U-15 national team training camp. Attending such camps does not endanger they're eligibility to play for the USA. Players such as Brandon Vazquez, part of the current U.S. U-20 pool, played for the USA at the 2015 U-17 World Cup after flirting with Mexico's program. Californians Edwin Lara and Abraham Romero left the U.S. program and played for Mexico at the 2015 U-17 World Cup.

The National Soccer Coaches Association of America (NSCAA) has launched a free online course to help educate coaches about the inclusion and support of lesbian, gay, bisexual and transgender (LGBT) athletes. The course, “LGBT: Diversity and Inclusion,” is free and takes about 10 minutes. 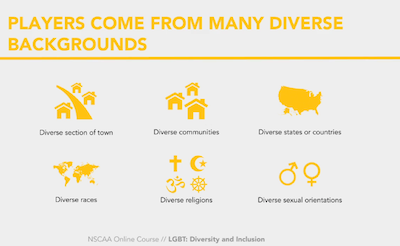 "I know of several high school students who have been inspired to come out by athletes like Robbie Rogers," said Dan Woog, chair of the NSCAA’s LGBT and Allies coaching community. "But I know others who are terrified about what coming out might mean. Sometimes even the most well-meaning coach might not create an atmosphere in which every player feels safe being himself or herself. I applaud the NSCAA for its leadership in the area of diversity and inclusion, and for its commitment to coaching education in every shape and form."

More than 70 percent LGBT youth frequently hear homophobic remarks, according recent study from the Fenway Institute on bullying of LGBT youth that also reported that 8 out of 10 have been verbally harassed and 4 out of 10 students been physically harassed. And that LGBT youth are at an increased rick of suicide attempts.

“Camaraderie, compassion, and collaboration are key to a successful team in any sport,” said NSCAA CEO Lynn Berling-Manuel. “Understanding how others can be different is essential and we want to help encourage the most respectful, inclusive environments possible across all of soccer.”

Woog is a former NSCAA Boys Youth Coach of the Year and is the author of several books, including two books on gay athletes, the “Jocks” series. Two years ago, the NSCAA launched an LGBT Soccer Coaches and Allies Community page on its web site.

“The goal of the NSCAA is to make people better coaches,” says Woog. “If a kid is dealing with any issues that prevent him from focusing, he’s not going to be as good a player as he could be. He’s not going to be able to contribute what he could and that impacts the entire team.”