Kids who want to play youth soccer within the city of Boston face a calamitous and disjointed mess.

With 3 million registered youth soccer players in the USA in 2014 representing an 89 percent increase since 1990, the sport is progressing rapidly, and yet the city of Boston is being left behind.

“We’re in the dark ages,” says Ian Mulliner. Mulliner, a Manchester, England native, is the technical director of the Massachusetts Youth Soccer Organization (MYSA). MYSA is based in Lancaster, Massachusetts, which is over an hour drive outside of Boston. While this is centrally located within the state, it’s impossible for any children in Boston to consistently get to. “There’s no one whose job it is to run Boston. I have to handle a whole state, the infrastructure just isn’t there,” Mulliner says. 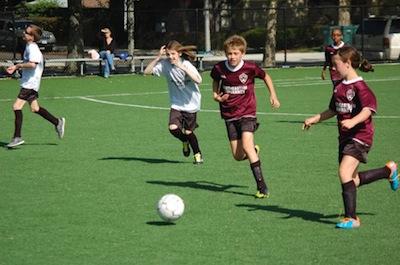 While Mulliner is 50 miles away, Jon Rudzinski works on the front lines of Boston as the head of Jamaica Plains Youth Soccer. “Why, in the middle of the biggest city in New England are we not large enough? We’re all volunteers. We just can’t do enough, it’s unbelievable,” he said. All coaches, and even Rudzinski, have other full-time jobs. Most coaches are parents with little to no formal coaching experience.

So how did we get here? What are the issues that Boston faces as a city for the development of youth soccer?

The first obstacle is always: where does the money come from? In Europe, every major city has at least one large professional club, whose academy is always the goal for any aspiring young player. These academies know it’s within their best interest to find talent and bring them into the first team, thus they invest large sums in building infrastructures in the community that benefit both the players and themselves. Academies in Barcelona and Amsterdam go so far as to have boarding school programs where the students simultaneously go to school and train.

The issue in Massachusetts is, our Barcelona or Ajax is the New England Revolution of the MLS. FC Barcelona was founded in 1899, while the Revolution was founded in 1995. The winner of the UEFA Champions League gets $16 million, while the winner of the North American Concacaf Champions League gets $500,000. It will take another 20 years before the New England Revolution can start building any infrastructure to rival Europe.

But what about the U.S. Soccer Federation? Surely it has money, and it’s within its best interests to improve youth soccer. If anything, it should be its top priority.

We spoke with Woodley Auguste, the director of youth soccer for the Boston Parks and Recreation department, about the city's relationship with U.S. Soccer. Auguste recently took over as soccer director, having worked in basketball for the past eight years. He explained that they applied for a grant from the U.S. Soccer Foundation, and they were approved for $15,000.

When an organization is awarded a grant by U.S. Soccer, the organization has to prove that the money is directly improving youth soccer in the community. The issue, Auguste explained, is that it’s often very difficult to quantify success, so they invest in shorter-term projects that may have less of a lasting impact, just so they can prove to U.S. Soccer that they used the grant correctly. Furthermore, he explained, $15,000 is merely scratching the surface, and it’s not enough to change the systemic issues that lie deep within the heart of Boston youth soccer.

So, what are those issues?

The most obvious obstacle to developing youth soccer in an urban environment is field space.

Auguste believes that communication is the key to maximizing field usage. He explained that, contrary to popular belief, there is enough space in areas like East Boston, Roxbury, and Dorchester to play. The issue is scheduling, especially between different sports. Auguste, who played American football as a kid, believes soccer is still not given the funds and time it deserves: “Football numbers are declining, soccer’s are going up, but the funding still acts like football is the dominant sport. They get five coaches where soccer gets one,” he said.

Rudzinski agrees that field space, while an issue, is often simply a facade for a more complicated underlying issue. He explained, as Auguste had touched on, the single biggest issues are communication and organization. “There’s no reason we couldn't have three times more kids playing, and they wouldn't have to set foot into a car,” he said.

A dysfunctional club system is a large part of the issues Boston faces.

“We probably have the most complicated club system of any state in America,” said head coach of Emerson College’s women's soccer team David Suvak. In Boston, Suvak explained, you have multiple different leagues, rather than one central league. Boston based leagues like BAYS, MAPLE and Middlesex have attempted to consolidate, but there’s no reason those couldn’t merge, aside from coordination. A parent looking at the club system in Boston has no idea where to start, no idea what the different levels are. “The club system is an absolute disastrous mess, anybody can enter, there’s no oversight. Too many games, too much travel,” Rudzinski said.

With the plethora of issues faced, everything can be traced back to centralization and communication. Thus, Caroline Foscato has a plan to fix this.

Foscato, who in 2008 co-founded a youth league in the South End, founded the Boston Soccer Summit last year as a way to open a dialogue between the various soccer programs in Boston. For the first few meetings Foscato said the focus was understanding what the various issues were, collecting data, and making sure everyone was on the same page. However, she believes now they understand exactly what the issues are. “Information is great, but now is the time for action,” she said.

People like Mulliner, Rudzinski, Auguste, and Suvak are present at these meetings and are hoping this is the beginning of a new era of Boston youth soccer. Yet, there’s reason for concern.

Dean Conway has been coaching in Boston for over 30 years. He’s seen it all. In fact, in the mid-1990s Conway says Massachusetts youth soccer was the apple of everyone’s eye. “People wouldn’t believe how well we were doing,” he said. At that point, MYSA had a full-time staff member in charge of the city of Boston. Things changed. That staff member left the position, no one was replaced, and the position was dissolved due to budget cuts.

Now, 20 years later, Boston is still fighting the same problems Conway had back then. “I think Caroline is an amazing person and what she’s trying to do with these summits is amazing, but ...” his voice trailed off as he turned to look out the window of the Jamaica Plains coffee shop. He knew the end to this sentence could be misconstrued. He let out a somber sigh, and peering down at the table he said, “The long and the short of it is: everyone smiles and shakes hands and afterward nothing gets done.” He was worried about saying that, but his love for the game is more important than being politically correct.

On November 20, 2016, the Boston Soccer Summit met for the fifth time. In those five meetings, they’ve had 30 different organizations represented by 50 different people. Foscato was well aware of Conway’s criticisms, and believes this time will be different: “I’ve spoken with Dean about what has failed in the past and I’m confident we can avoid those pitfalls,” she said. She explained that this meeting was different than the past ones, that they are on the verge of making tangible progress.

Perhaps the biggest issue is that there’s no one whose job it is to facilitate communication between the leagues and organizations. Foscato said that they are nearing the final stages in setting up such a position. “This is it,” she said, “now the real work begins.”

The 167,402 registered youth soccer players in Massachusetts certainly hope so.

(Aiden Teplitzky Dobens is a free-lance journalist currently residing in Boston, Massachusetts. Born in New York City to a Chilean mother and American father, Aiden was playing with a soccer ball as soon as he could walk and has followed the sport obsessively since the age of 7. He volunteers with Soccer Without Borders and South End Soccer in Boston, also doing video and photography work for local youth soccer programs. Although soccer is his passion, Aiden has written for a variety of sites, from music journalism to immigration rights. If you'd like to contact him for photo, video, or written work, please email: aidentdobens@gmail.com.)