Who's who of the MLS expansion race

MLS announced details of the timetable for the next wave of expansion that will take the league from 24 to 28 teams. MLS commissioner Don Garber mentioned 10 markets that have expressed interest in bidding. Here's a look at how these markets stack up, who's behind their bids and what stands out about soccer in them.

CHARLOTTE.
Charlotte's USL presence has been limited because of stadium issues, but it has drawn huge crowds for international games that caught MLS's attention. Garber says MLS has been in discussions with a potential investor group. "It's very, very early on," he said. "So far we like what we've seen, but the process has just started there, I think."

Name Game: Bruton Smith, the owner/CEO of NASCAR giant Speedway Motorsports and a recent NASCAR Hall of Fame inductee, is heading that ownership group along with his son, Marcus.

Number Crunching: Eleven days apart in 2015, Charlotte's Bank of America Stadium drew crowds of 61,224 for an International Champions Cup match between Chelsea and Paris St. Germain and 55,823 for the wild Mexico-Trinidad & Tobago Gold Cup game that ended in a 4-4 tie.

CINCINNATI.
Just two weeks ago, Garber was in Cincinnati to gauge interest in the Queen City, where FC Cincinnati shattered USL attendance records in its first season. "They have done a lot of things really well," Garber told the Cincinnati Enquirer. FC Cincinnati plays at Nippert Stadium, the University of Cincinnati football stadium, where it is chipping in $2 million to widen the field for 2017. Whether FC Cincinnati can find a long-term stadium solution will go a long way toward determining if it makes the cut.

Number Crunching: FC Cincinnati shattered all USL records with an average attendance of 17,296 during the regular season and a crowd of  30,187 for its playoff game at Nippert Stadium.

DETROIT.
Detroit Pistons owner Tom Gores (Platinum Equity founder) and Cleveland Cavaliers owner Dan Gilbert (Quicken Loans founder) threw their names into the MLS expansion hat in April, proposing a Wayne County jail site in Greektown for a soccer stadium and commercial development. Said Garber, "A proposed plan to take the team down into the city, I think, speaks wonders for where Detroit is hoping to get to, which is this continuation of a city on the rise."

Number Crunching: Amateur team Detroit City FC raised $725,500 to renovate Hamtramck's Keyworth Stadium and paid out $107,000 to their grassroots investors after averaging 5,208 fans, an NPSL attendance record, for the Boys of Rouge's first season at their new stadium. 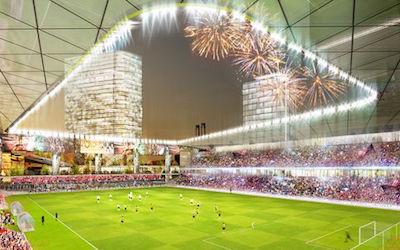 NASHVILLE
Nashville is a late comer on the MLS expansion scene, having formed in August an MLS steering committee that includes leaders of the Nashville sports and business community. Garber says tests in the market with men's and women's national team games have been encouraging and its location in the Southeast, where MLS is still growing, is a positive. He cautioned, though, that Nashville is not as far along as some other bidders.

Name Game: Court Jeske, the CEO of the USL's Nashville SC, which will begin play in 2018, is a former MLS executive, having worked as vice president of international business for Soccer United Marketing.

Number Crunching: The crowd of 44,835 at Nissan Stadium for the Mexico-New Zealand friendly in October was the largest crowd for a non-MLS game in the last three months in the United States.

RALEIGH/DURHAM
The Triangle (Raleigh–Durham–Chapel Hill) has a population of 2 million and is one of the strongest youth and college soccer markets in the country. "We all know what the interests in soccer are in Carolina generally," said Garber. Whether House Bill 2, which critics have called "the most anti-LGBT bill in the country" will be a deterrent to an MLS bid by Raleigh/Durham and Charlotte remains to be seen. "It's not something that we've been addressing at this time," added Garber. "But clearly as we get into more detail with both groups, I am sure it will be a factor along with many, many other factors that we have to consider."

Name Game: Amid the turmoil surrounding the NASL, Carolina RailHawks owner Steve Malik announced a name change -- North Carolina FC -- and plans for a campaign to get an MLS expansion team -- and NWSL expansion team, the latter for the 2018 women's season. Whether NCFC plays in the NASL or USL in 2017 is yet to be determined.

Number Crunching: Cary's WakeMed Soccer Park has been one of the most reliable venues for support for the Women's College Cup, drawing four of the top 10 crowds for women's finals. The 2015 final drew 10,676 fans in Cary, the largest crowd in 17 years and second largest crowd ever.

SACRAMENTO
No group is as far along in the expansion process as Sacramento Republic FC. The Sacramento city council recently approved plans to build a $226 million soccer stadium at the downtown railyards. All this after three years of work by Sac Republic to galvanize city support in the California state capital. That prompted Garber, who visited Sacramento in April, to say at the time that Sacramento has “been able to check the boxes that are required” and he hoped to have a decision before outgoing mayor Kevin Johnson, the former NBA star, left office "so he can see his dream become a reality." Johnson's last full city council meeting was on Tuesday night, and the new, formalized expansion process has some supporters worried about MLS's commitment to Sacramento in the face of competition from bigger markets. But Garber insisted that he's probably talked more often with the Sac leadership than any other group.

Number Crunching: Sac Republic set a new season attendance record in 2016, drawing 172,711 fans and selling out all but one USL match. 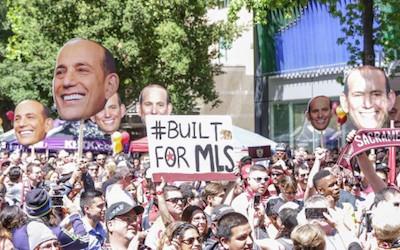 ST. LOUIS
St. Louis is synonymous with soccer in the United States, though it took the NFL Rams' decision to bail on St. Louis for an MLS expansion effort to pick up steam. SC STL has plans for a $200 million downtown stadium on land west of Union Station, but its viability may depend on public support. A referendum might be placed on the April ballot for St. Louis voters to decide whether to approve $80 million in public funding. “If the vote fails, it’s in many ways a referendum on behalf of the community on whether or not they want to support a plan for a stadium downtown,” Garber said. “The St. Louis ownership group needs to determine whether public support exists.”

Name Game: Paul Edgerley, formerly of Bain Capital and currently a minority owner with both the Boston Celtics and AS Roma in Italy, serves as lead owner and chairman of SC STL and just returned from MLS Cup in Toronto.

Number Crunching: The crowd of 43,433 for the USA-St. Vincent & The Grenadines match in November 2015 is the largest of the current World Cup qualifying cycle and is a record for a U.S. men's or women's national team game at Busch Stadium in St. Louis. 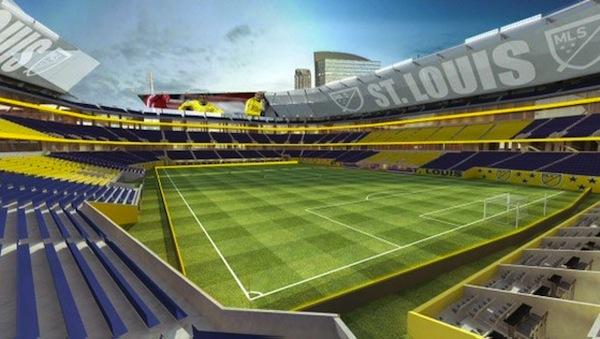 SAN ANTONIO
San Antonio ranks last among the 10 MLS expansion targets in terms of the size of its television market, but it is first in terms of Hispanic television markets, which put it on MLS's radar several years ago. San Antonio FC entered the race last year when SS&E, which owns and operates the NBA’s San Antonio Spurs, launched a USL team and moved it into Toyota Field, build by NASL Scorpions founder Gordon Hartman. The city of San Antonio and Bexar County split the cost of buying Toyota Field and has an agreement with SS&E that the latter will pay a "claw-back fee" -- a penalty, in essence -- if no MLS team is secured for Toyota Field, which will need to be expanded. "We are spending time with them," said Garber, "and met with them a number of times and continue to be intrigued, as we are by the activity and potential in Austin."

Number Crunching: The USA-Mexico game at the Alamodome in April 2015 drew 64,349 fans, the largest crowd for a men's home friendly in the last four years.

SAN DIEGO
San Diego already has a pro soccer team -- Tijuana's popular Xolos, just across the border in Mexico. That has always deterred MLS from considering the San Diego  market, but the possible departure of the NFL Chargers could open up the market to MLS, like the Rams' move to Los Angeles did in St. Louis. "Should the Chargers make the decision to not remain in San Diego," said Garber, "the market would be more attractive to us. We take that and we believe that because we've seen what happened in Seattle when the [NBA] Sonics left."

Name Game: Garber would not identify the San Diego investment group MLS has been talking to, but the San Diego Union-Tribune reported the group is widely believed to be headed by Mike Stone, a San Diego private equity investor and philanthropist.

Number Crunching: Xolos' officials estimate that upward of 8,000 fans per game make their way from the San Diego area for Liga MX matches.

TAMPA/ST. PETERSBURG
Of the major television markets without an MLS team, only Detroit is larger than Tampa/St. Petersburg. The Rowdies, who will play in the USL in 2017 after leaving the NASL, entered the race last week when they announced plans to expand Al Lang Stadium, their home in St. Petersburg. The project, which calls for an expansion to 18,000 seats at a cost of $80 million, would be privately financed. It's being billed as an enhancement to the waterfront area without costing taxpayers money.

Name Game: Rowdies CEO Bill Edwards is behind the effort to bring MLS back to the Tampa/St. Petersburg area -- MLS folded the Tampa Bay Mutiny in 2001 -- and is promoting a season-ticket drive for the Rowdies' first USL season as a test of the market's support for an MLS team.

Number Crunching: The four U.S. men's matches played at Tampa's Raymond James Stadium in the last decade have all drawn crowds of more than 20,000. 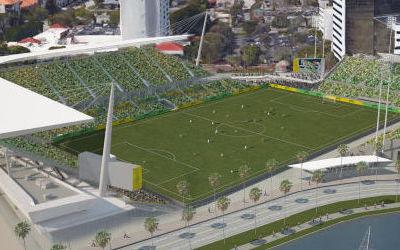 don garber, mls
18 comments about "Who's who of the MLS expansion race".
Read more comments >
Next story loading