When the Dallas Tornado took the most amazing world tour ever

2017 will mark the 50th anniversary of the birth of the Dallas Tornado, the Lamar Hunt-owned NASL club that prepared for its first season with a seven-month world tour that spanned five continents.

The wonderfully illustrated book, “The Amazing World Tour of the Dallas Tornado,” is written by Fons Stoffels, a Dutch forward who, at age 22, scored 22 goals in the 48 games in 25 countries, including in South Vietnam during the war.

Offseason world tours are of course a big part of club soccer today. Major European clubs venture to the USA and Asia, fans pay steep ticket prices to watch exhibition games and the clubs increase their replica jersey sales. But they play a few games, the teams stay in five-star hotels, and they're soon back home.

Hunt, the son of oil Texas oil tycoon H.L. Hunt, was owner of the Kansas City Chiefs football team, led the founding of the American Football League, and after its merger with the NFL, came up with the name for the Super Bowl. But in 1966, he followed the World Cup in England and watched the broadcast of the thrilling final, England’s 4-2 overtime win over West Germany, on U.S. television.

“I was extremely fascinated by the game,” said Hunt, “especially by the loud reaction of the crowd indicated by the noise level from the spectators as the game rocked by and forth. I was especially impressed by the international character of the match. England against West Germany -- not the type of thing I was accustomed to seeing in American sports.”

Hunt, who died in 2006, was also integral to the 1996 launch of MLS as owner of the Kansas City Wizards and the Columbus Crew. The U.S. Open Cup is named after him. When he started his first soccer venture, he and Tornado co-owner Bill McNutt, who made his fortune with mail-order fruitcakes, and Coach Bob Kap decided to recruit players in Europe and take them on a world tour before the 1968 season. The international games would prepare the young players for their debut NASL season while serving as soccer ambassadors for the USA and help repair the tarnished world reputation of Dallas, known to much of the world because the John F. Kennedy assassination. The players sported blazers and 10-gallon hats at receptions. 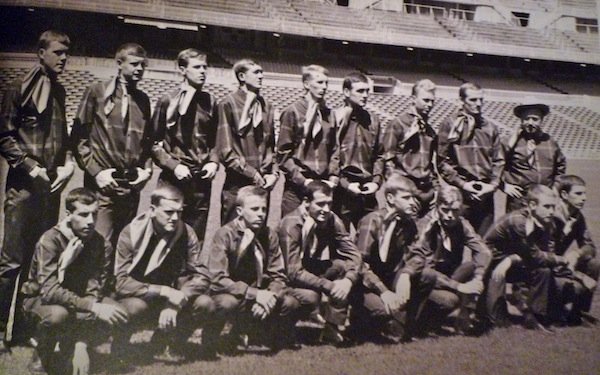 In Madrid, the Serbian-born Kap gathered 16 players, mostly ages 19 to 22, hailing from Britain, Norway, Denmark and the Netherlands -- and one American, the St. Louis product Jay Moore.

Mike Renshaw, who would star on Tornado’s 1971 NASL championship team, learned about the opportunity from a Liverpool Echo ad.

After training in Madrid, they played three games in Spain, a fourth in Morocco, before returning to face Real Oviedo. From there, they went to Turkey, Cyprus, Iran and Pakistan before the end of October.

By the Tornado’s final tour game in February of 1968 in Tahiti, it had played in Burma, Indonesia, South Vietnam, Taiwan, Japan, the Philipines, Australia, New Zealand and Fiji. 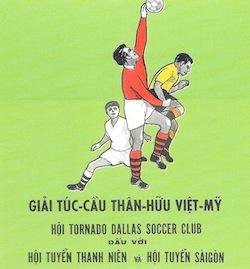 They traveled to India amid a civil war, got lost in the Bengali jungle – “11 on Dallas Tornado Soccer Team Missing in Border Sector” was the Associated Press headline datelined Calcutta -- and pelted with stones, bottles and fruit in Singapore, where fans chanted “Go Home Yankees” and “Down with American Imperialists.” When they landed in Saigon, they noticed a plane being loaded with body bags. Before leaving for Taipei, they took a military boat ride on the Saigon River.

But there were also peaceful canoe trips in Tahiti, beach time in New Zealand, visiting temples in Japan and the Shwedagon Pagoda in Burma, nightlife in Manila, belly-dancing in Morocco. Many of the crowds exceeded 30,000 and the tour ended with a 10-26-9 win-loss tie record before they landed at Love Field in Dallas via Mexico City.

This manner of preseason preparation did not pan out for the Tornado’s debut season. It finished the 1968 NASL season with two wins, four ties and 26 losses. But the book makes clear, the globetrotters had no regrets and cherish the memories of their great adventure.

"The Amazing World Tour of the Dallas Tornado" (Hardcover) by Fons Stoffels. $24.95 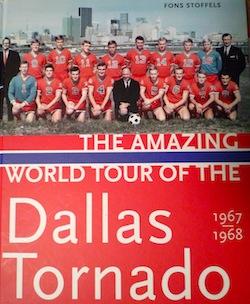 international
1 comment about "When the Dallas Tornado took the most amazing world tour ever ".
Next story loading