Newcomers to USA get a boost from Soccer Without Borders: Meet founder Ben Gucciardi

Ben Gucciardi is the founder of Soccer Without Borders, which is entering its second decade of providing soccer programs for under-served youth in the USA and abroad. Also known as Futbol Sin Fronteras, SWB started in Oakland, California, and its year-round programs in the USA serve more than 1,000 children in Oakland, Baltimore, Boston and Greeley, Colorado. Seventy percent of the SWB USA participants are refugees or asylees. 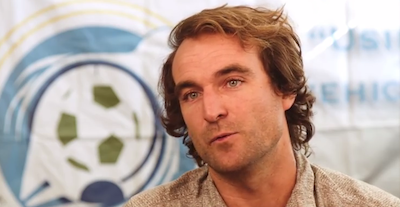 Backstory …
I completed a master's degree in education and got very interested in spaces where significant learning happens outside of the traditional classroom setting.

In my studies, I came across a book called "Pedagogy of the Oppressed" by a Brazilian author, Paulo Freire. The book talks about redefining traditional relationships between student and teacher, and argues that the way people are in relationship with one another in the learning context can be as meaningful as the content of what is being taught. I wanted to bring some of those ideas to the soccer context, and really reconsider the traditional way coaches and players relate to be more equal and more about empowering players to make decisions and take responsibility, with the coach serving as a facilitator and focusing on making sure all players are included and have equal opportunities.

I started writing up the concept for Soccer Without Borders with these thoughts in mind around 2005. Around the same time, my partner Lauren Markham was working in refugee resettlement in Oakland, and mentioned that there were all of these kids who had nothing to do during the summer months. We came up with a plan to run a camp that integrated soccer, team-building activities, health education and dance/yoga, and the kids got so much out of it. From there, the organization has grown organically over the last 10 years, and I am always amazed at how many great people have gotten involved and helped the organization develop in new ways.

The players …
Players in our U.S. programs are newcomer youth: immigrants, refugees, and asylees. About 70% of our participants in the U.S. programs have refugee or asylee status, meaning they have fled their countries to escape war, persecution, natural disaster or other crises. 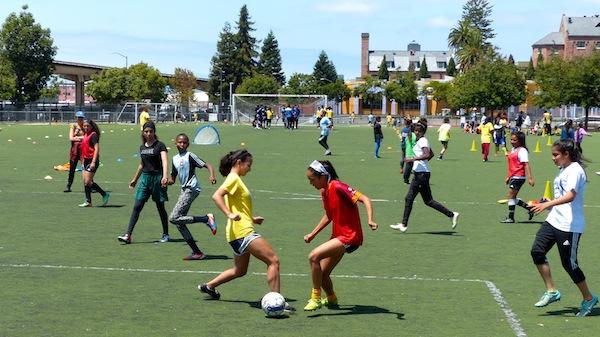 The other 30 percent immigrated seeking new opportunities and a chance for a better future. We serve primarily middle school and high school-age students. Most of our players arrive in the U.S. speaking a minimal amount of English, and many are trying to overcome past traumas. In addition, a large portion of our participants have a history of interrupted formal education, meaning they may have been out of school for a significant amount of time, further complicating their academic progress at U.S. schools.

Recently, we have seen a huge increase in unaccompanied minors arriving to our U.S. programs from El Salvador, Guatemala and Honduras. These are young people, usually 14 to 17 years old, who make the dangerous journey from their home countries by themselves and then seek asylum here in the United States. Many reunite with a family member here, and stay with an aunt or an uncle or a parent who may have immigrated earlier.

In spite of the tremendous challenges they face, many of our players are highly motivated to rebuild their lives be successful here. One of our graduates in Oakland, Yohannes Harish, who is originally from Eritrea, is now the captain of the Holy Names College men's varsity soccer team. We have numerous alumni who have gone on to coach younger Soccer Without Borders teams. For example, Heman Rai, who came to the USA as a refugee from Bhutan, is now a coach at SWB Baltimore while he attends Loyola University.

Time and time again, we see our graduates go on to not only be successful for themselves, but to think of giving back to the community. Since so many of them have been through great challenges, when they begin to have some success, they always want to help others navigate their own struggles.

On the field …
Our teams participate in various youth soccer leagues, and play as club teams in those leagues. This is important for a number of reasons. We have seen that weekend games are great motivation for the players, and can be leveraged for academic and behavioral incentives during the school week, as well as participation in non-soccer SWB programming such as tutoring, team trips, etc.

The leagues also create a great opportunity for integration with the broader community. For example, after games, we have had teams invite us to join their team for snacks after the game. Players start to build relationships with each other, and that enriches the lives of players on both sides, and broadens the perspectives of everyone. Finally, the games start to allow the players to build more of a sense of team identity, which becomes sort of a second family for many of the players.

The challenges …
One of our biggest challenges is transportation. Very few of our families are able to drive kids to games or practices. Taking the bus often means going through dangerous neighborhoods at unsafe times. Our staff spends a lot of time coordinating rides and we rely a great deal on volunteers who are willing to help us get to games and team trips, who really make it possible for our teams to play in leagues.

An additional challenge we face is around girls getting permission to take part in soccer. Many of the girls in our program come from cultures where it is not the norm for girls to play soccer, and so sometimes, families have some concerns about allowing their daughters to participate. Usually, when we talk about the ways our program supports students academically/socially as well, parents are more willing to let the girls play. 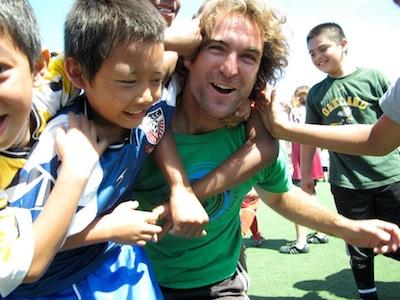 Funding ...
Our program is 100 percent free for all players, and so this means funding is always a challenge for us. Our program is funded from a variety of sources: grants from both the government and private foundations, corporate sponsorship, individual donations and revenue from events we do like Small Goals, Big Change tournaments and various other events.

One really inspiring trend as been the growth of our Positive Tracks Ambassadors program. SWB Ambassadors are young people (under the age of 23) who support SWB at their school or in their community, and raise funds, organize equipment drives, etc. And I am always blown away by the creativity and passion young people bring to their projects, and the success they have in raising funds that enable SWB players to play. Finally, we are currently holding our annual Play It Forward campaign, which comes at the end of the year and is crucial to our ability to run programs for the year.

Your soccer background …
I grew up in San Francisco  and went on to play college soccer at Lehigh University in Bethlehem, Pennsylvania, and then I played a few seasons for the San Francisco Seals after college. I think I may still hold the record for slowest player to be captain of a Division 1 college soccer team, but as a defensive central midfielder I could hide that by being smart and disciplined.

Poetry …
In the work I do through SWB, I serve as a mentor to young people that are dealing with immense challenges, often navigating past traumas with minimal family support, and living in neighborhoods where they are exposed to violence regularly. I think it is important for people involved in this kind of work to have an outlet, and poetry has been an outlet, something that nourishes me.

I have always written poetry, but in 2013, with the encouragement of some friends who are also poets/writers, I submitted some poems to a contest and ended up winning [the Dorothy Rosenberg Memorial Prize]. This gave me the confidence to continue developing my craft and to begin submitting work to literary journals, and I have had some success, publishing a good number of poems in various outlets and earning a few more awards/residencies. I would like to continue to grow as a writer and eventually plan on putting a collection together.