Bob Bradley: 'We needed to stick to the plan'

On Tuesday night, Bob Bradley got word that he had been fired as Swansea City manager after just 85 days and 11 games in charge of the struggling English Premier League club.

On Wednesday, he took to British radio shows to present his side of the story. He admitted on TalkSPORT he was "a little bit pissed off" and didn't agree with the decision. On BBC Radio Wales, he expressed his disappointment with the impatience of Swansea City's new American owners and its supporters. 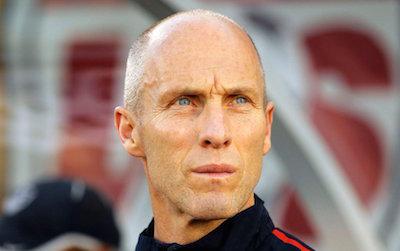 “I believe in my work," Bradley told TalkSPORT, "and I certainly knew that I was going into a difficult situation and I also understand that when you go in the clock’s already ticking, so it’s not like you’re expecting all sorts of time."

Bradley's frustration is that he never got a chance to rebuild the team in the January transfer window and leave his imprint on the team.

"We had talked about players," he said of transfer targets. "I’m frustrated because I feel like every place I’ve been, I feel I’ve been able to put my stamp on the team in terms of the mentality, in terms of the football and the tactics."

Swansea City's situation turned from bad to worse on Monday when the Swans lost at home to West Ham United, 4-1, and the Swansea fans turned on Bradley, Swansea City chairman Huw Jenkins and Levien and Kaplan, who had taken over as majority owners in the offseason.

"You just could tell at that moment," he said, "the wind comes out of the sails and you see the body language of the players."

The 4-1 defeat was the latest in a series of blowouts. In eight of Bradley's 11 games in charge, Swansea City allowed three or more goals. How to deal with that adversity without bunkering down was the essence of Bradley's challenge.

"You can worry about the score and go for damage control," he said, "or you can encourage the idea that if we're ever going to be a team worth our soul, then we've gotta have to have a way to push back into games."

Bradley took responsibility for that not happening but suggested the Swansea City owners pressed the panic button.

"Jason and Steve are good men, they've been successful in business, but sports, football and business don't always work exactly the same way," Bradley told BBC Radio Wales. "I think that they have still important things they must recognize and learn."

The atmosphere at the Liberty on Tuesday was portrayed at toxic, but Bradley said he felt many Swansea City fans were with him and realized the Swans just needed to bring in new players.

"I was disappointed that when a few balls don't bounce our way and we lose a few points, that they [Kaplan and Levien] let outside factors get in the way of the decision-making," he added. They became more concerned by the negative atmosphere instead of realizing this was a project and that we needed to stick to the plan."

Bradley had the same message for Swansea fans.

"Stick behind the team," he said. "There are off-the-field matters that can be figured out over time, but when a team is fighting to stay up it needs everybody to get behind the team. That's what real supporters are about."

bob bradley, england
20 comments about "Bob Bradley: 'We needed to stick to the plan'".
Read more comments >
Next story loading