American soccer fans are fortunate that U.S. television provides access to pretty much every soccer game from around the world and within our shores. But when it comes to the broadcasts, the fans deserve better commentary, which far too often reveals an ignorance of the rules.

It should, of course, be a basic requirement that anyone who gets paid to comment on games, who critiques referees and players, has proficient knowledge of soccer’s rules. But whether it’s Britain-based EPL announcers or Americans calling U.S. national team, MLS or college games -- it’s shockingly frequent that we hear assessments that fly in the face of what the rulebook says.

It’s especially troubling because TV commentators have great influence. Their misinformation makes it down to the grassroots, to coaches, parents and youth players. The referee’s job thus becomes even more difficult. 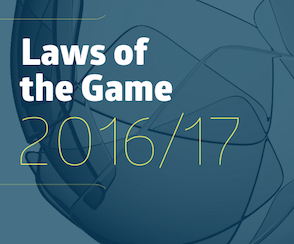 So I recommend, TV commentators, make a resolution this new year to read the rulebook. In the meanwhile, think twice when you’re about to say…

‘He went down too easily’
The main point here is not how a player went down but whether he was fouled. According to the FIFA rulebook, attempting to kick, strike or trip a player warrants a direct free kick just the same as kicking, striking or tripping a player does. How the player went down does not determine whether it was a foul.

‘He got the ball’
It may be possible for a player to make fair contact with the opponent after winning the ball, but nowhere is it written in the rulebook that a player is absolved of a foul if he “got the ball.” A direct free kick should be awarded if the foul is "considered by the referee to be careless, reckless or involving disproportionate force." That includes not just jumping at, kicking, charging or tripping -- but anything considered a “tackle” or “a challenge.”

‘There was no intent’
This is clear evidence that commentator is unfamiliar with the FIFA rulebook, which two decades ago removed the intent requirement for all fouls except handling the ball. In that case, the referee must determine whether the handling was “deliberate.” But we still hear after a late tackle that mangles the opponent commentators defending the fouler because it wasn’t intentional.

‘Not worthy of a caution’
It’s fine for commentators to chime in on whether a referee should or shouldn’t yellow-card or red-card a player. But how often do you hear the pundits actually refer to the rulebook? Here’s what it says:

• If the foul is careless it does not warrant a card.

• If the foul is reckless -- “when a player acts with disregard to the danger to, or consequences for, an opponent” -- a yellow card must be shown.

• If the foul is excessive force -- “when a player exceeds the necessary use of force and endangers the safety of an opponent” -- a red card must be shown.

TV commentators should also know that the rulebook does not exempt the goalkeepers from any of the seven direct free-kick fouls described in Section 1 of Rule 12, Fouls and Misconduct. Nowhere in the rulebook does it make legitimate jumping into an opponent’s body with a raised knee.

And if you are delivering comments on the sport to hundreds of thousands, please reconsider saying it was “professional foul” or a “smart foul” -- or “he had no option but to foul.”

Of course, he had an option -- the option not to cheat. To use euphemisms for flouting the rules is to advocate fouling as a tactic. It’s being an apologist for players, coaches and teams who are trying to cheat their way to a win instead of seeking victory by playing the better soccer.

Soccer in 2016 brought us these stats from games, all of which went to overtime, that were supposed to showcase the best of the sport:

We were treated to about five times as many fouls as scoring chances. We saw three goals in 10 hours of soccer.

That the sport of soccer has gotten to a point where championship games are won without scoring and the scoring rate overall has direly decreased over the years is not the fault of the TV commentators. But they are accomplices in creating a culture in which a negative approach to the game is hailed rather than assailed.

It’s appalling enough when they advocate foul play by praising the “smart foul.” But it’s a simply inexcusable when TV commentators -- the supposed experts -- do so by misrepresenting the rules, which they could easily download HERE.