The NWSL has struggled to make in impact in many markets but achieved an enviable record for a U.S. soccer league: It survived four seasons without having a team fold or relocate. That's about to change as Four Four Two reported late Thursday the champion Western New York Flash will be leaving its Rochester home for North Carolina.

The Flash holds the distinction of having won championships in four different leagues in six seasons: W-League (2010), WPS (2011) and WPSL Elite (2012) in addition to the NWSL. 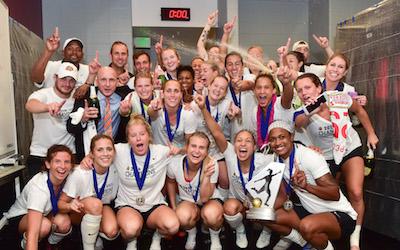 FROM BUFFALO TO ROCHESTER. Despite having the highest-scoring team in the league in 2016, the Flash averaged just 3,868 fans a game. Joe Sahlen, owner of Sahlen Packing Company, a prominent Buffalo meat packing company, founded the Flash in 2008. It moved to play in the Rochester Rhinos Stadium when it joined the NWSL.

The Flash will move to one of the hotbeds of women's college soccer. Cary's WakeMed Soccer Park drew 10,676 fans for the 2015 NCAA final, the largest crowd in 17 years and second largest crowd ever.

ON TO WOMEN'S COLLEGE HOTBED. In late 2016, Carolina RailHawks owner Steve Malik announced a name change -- North Carolina FC -- and plans for a campaign to get an MLS expansion team -- and NWSL expansion team, the latter for the 2018 women's season. The latter will come a year early.

The Flash had five players called up for the U.S. women's camp that opens next week: Jaelene Hinkle, Samantha Mewis, Taylor Smith, Jessica McDonald and Lynn Williams. Only McDonald, who played at North Carolina, has more than two years of pro experience.

The report of the Flash's move came the same day it announced the signing of Brazilian Olympian Debinha, who has played in Norway and China in recent years. The forward will join fellow Brazilian Rosana on the Flash, which acquired her rights from the Houston Dash last month.

STRUGGLE FOR ACCEPTANCE. The stability within the NWSL, in terms of teams and its ownership, has belied its struggle to gain widespread acceptance.

While Portland is a runaway success with a record average attendance of 16,945 a game in 2016, the Thorns' average was more than that of the bottom five teams in the NWSL combined.

The Kansas City Star reported on Tuesday that FC Kansas City, the 2014 and 2015 NWSL champion, was in the process of being sold to Elam Baer, a Minnesota businessman. Despite being two-time defending champion, FC Kansas City averaged just 3,162 fans a game in 2016.

Crystal Dunn's exit from the 2016 runner-up Washington Spirit for Chelsea followed what sources told the Washington Post was a "toxic atmosphere" at the club in 2016.