Soccer & Concussion (Part 1): A Disgraceful Lack of Action -- Protocols are not enough

There is, it seems to me, one thing above all others that soccer totally failed to get right in 2016. And I can see little to suggest that things will be any better in 2017.

Now, it is not unknown for early research in medical matters to be unbalanced, even to be unduly alarmist. That may turn out to be the case with some of the more dire warnings that we are getting about concussions. But for the moment, uncertainty rules. Given what is at stake here -- serious medical issues, the end of a career, a post-career life full of mental problems -- there is only one approach that can be justified: caution.

Caution which soccer needs to apply in two ways: 1. By taking steps to reduce the incidence of head injuries during games, and 2. By making sure that the dangers of concussion are fully understood, and that specialized medical advice and treatment is available wherever possible.

How does soccer score on those two fronts? Very poorly. This is worse than disappointing, it is disgraceful. Soccer, as the only sport in which the head is repeatedly used to play the ball, is always going to be regarded, rightly or wrongly, as a likely source of concussions. Because of this unsought prominence, it has a leading role to play in the search for safe sporting activity.

Yet it has done virtually nothing to look at itself and ask whether changes in the way the game is played might reduce head injuries. I say “virtually nothing,” because there is one exception: U.S. Soccer, which has issued a diktat banning heading in under-11 and younger age groups, and has made a number of other moves showing that it is aware of what needs to be done.

Elsewhere the sport has made no effort at all to cut down on head injuries. It has made some moves to promote better understanding of the problem with the aim that concussion injuries are quickly detected and that medical help is available as soon as possible.

Frankly, that is putting the cart before the horse. If you have a traffic black spot where accidents and serious injuries are frequent, you need to install traffic lights. To say Sorry, no lights, they would impede traffic flow ... but we will offer better hospital treatment to the victims, is a callous evasion of responsibility.

Yet that is exactly what soccer is doing. Rather than taking steps that might -- or would -- reduce the number of concussion injuries, soccer is instead relying its so-called “concussion protocols.”

Words, of course. Words. Dressed up with that legal-sounding protocol title. But where concussions are concerned, when players’ futures are at stake, words are not enough. Words are only helpful if they lead to action.

If no action follows the words, then we are surely entitled to look askance at the protocols, to wonder if they are being used as a smokescreen to avoid rather than to initiate action.

And what do we see? Because soccer has made no effort to ensure otherwise, we see what we’ve always seen, plenty of heading and plenty of head clashes. Then, we are likely to see something different: Referees are now quicker to stop play and wave “medical personnel” on to the field. (Incidentally, does “medical personnel” include the physio? Or must a physician be present? The protocols and guidelines that I have read are not helpful on this point).

Anyway, so far so good. So far -- and, it seems to me -- no further. How many of you have seen an incident in a pro game where, after “medical personnel” have entered the field to inspect a head injury, the player has been withdrawn from a game? Possibly it has happened. I have not seen it.

Much more frequent is the type of incident that happened in a recent EPL game between Manchester City and Crystal Palace. The Man City captain Vincent Kompany took a tremendous whack to the head, a frightful blow that sent him crashing heavily to the ground. Play was stopped immediately, on came the Man City physio. I suppose some sort of rather superficial tests were conducted, then Kompany -- who had looked decidedly shaken in the TV close-ups -- got to his feet, walked off -- and within a minute was back on the field. 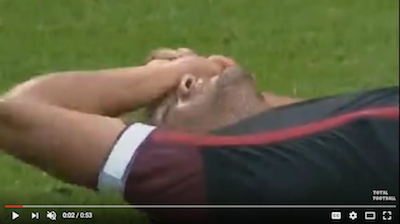 How on earth could that be? Kompany had just taken a ferocious, sickening blow to the head -- yet within a minute or two he had been judged fit enough to continue in a game where he was quite likely to take further hits. As far as I could see, Kompany did not get hit again but within six minutes he was crouching on his haunches, unable to go on. This time he left the game for good.

This incident raises a couple of crucial points about the protocols. As so often happens when objective scientific detail starts to take over from personal observation, the much derided “common sense” is abandoned. Yet in the Kompany case, my strong feeling is that the protocol was unnecessary -- worse, an obstruction -- to the taking of the correct action. Surely, no one who saw the collision needed to consult a protocol, or ask some simplistic questions (“What venue are we at today?”… “Which half is it now?” are two of the recommendations) to know that Kompany needed to come off the field?

Another vital point raised by the Kompany incident concerns the role of team doctors. Can they be trusted to give an objective assessment of the player’s condition? Are they not under pressure by their employers -- the pro club, that is -- to favor getting a key player back into the game?

There was a famous first-half incident during the World Cup final in 2014 when the German player Christoph Kramer took a heavy blow to the head. TV viewers could see an obviously dazed player -- yet, after inspection, he was sent back on to the field. Later, referee Nicola Rizzoli reported that Kramer had asked him “Is this the final?” After 13 confused minutes, Kramer, thoroughly disorientated, was substituted. How can anyone believe that he should have been allowed to return to the field? 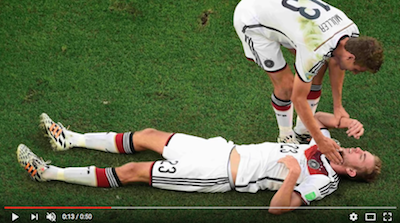 An even more baffling and worrying take on the medical requirements came from, of all people, FIFA’s chief medical officer, Jiri Dvorak. During an EPL game in November 2013, Spurs goalkeeper Hugo Lloris, diving at the feet of Everton’s Romelu Lukaku, had taken a severe bow to his head from Lukaku’s knee. Although obviously dazed, Lloris was allowed some time to recover, and the game then continued with him still in the Spurs’ goal. Dvorak’s criticism of Spurs was uncompromising. He asserted that there was a 99% probability that Lloris would have had a concussion and "should have been substituted.” 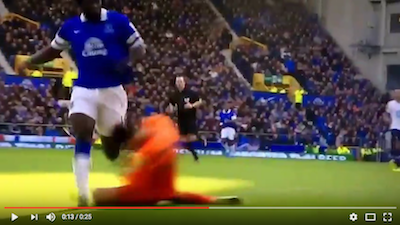 Yet, some six months later, Dvorak supported the German decision to send Kramer back on to the field in the World Cup final. The close parallels with the Lloris incident were too obvious to ignore. So how come Dvorak could flay Spurs, then support Germany for doing the very same thing? It has been pointed out that there was one glaring difference in the two incidents: Lloris’ injury had occurred in a game under the aegis of the English Premier League, whereas Kramer’s injury came in a game controlled by FIFA ... which was, at that time, Dvorak’s boss.

Thus, the whole idea of a protocol -- any protocol in any sport -- is bound to be suspect if it needs to be enforced by staff members whose employers might well think differently.