Soccer & Concussion (Part 2): What needs to be done -- before the lawyers move in

The suspect nature of the enforcement of protocols is by no means the only barrier to any campaign that aims to reduce concussion injuries.

In a web site story headlined “Germany Lags Behind on Concussion Risk-Awareness,” author Jens Krepela quotes Dr. Werner Krutsch, a trauma surgeon and specialist in soccer injuries, on concussions: "These injuries need to be correctly diagnosed and treated. Unfortunately, in sports, trivialization remains a problem.”

It does. There is certainly, in soccer, a strong tendency to make light of head injuries, even to make fun of them. An almost inhuman response. Concussions are not to be viewed as trivial injuries.

The necessary reading here -- I urge you to read it -- is the moving story, beautifully told by journalist Steve Goff, of MLS player Chris Rolfe and what he has suffered since sustaining a concussion injury in April last year.

If head injuries are not trivialized, they are quite likely to be glorified. That may sound like the opposite of being trivialized, but it is merely the other face of the same coin. One of the all-time iconic photos of English soccer dates back to 1989. It shows defender Terry Butcher, during a game against Sweden, with his head bandage, face and shirt covered -- and I mean covered -- in blood. Butcher continued to play. 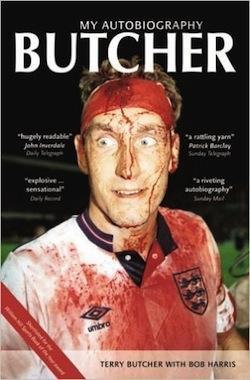 That was -- and, unfortunately, still is -- the sort of mindless grit that is so admired in soccer circles. It represents the ultimate in trivialization, sending the message that head injuries are minor matters and that you simply play on, ignoring the pain ... and the blood.

Dr. Krutsch, quoted above, makes a good point when he does not single out soccer, but emphasizes that trivialization is a problem in “sports” ... all of them.

Proof of that can be found in the supposedly gentlemanly game of cricket. In 2014, a highly promising 25-year-old Australian batsman, Phillip Hughes, was hit on the head by a ball from a fast bowler. He died in hospital two days later.

Some explanation: In cricket, fast bowlers are capable of delivering the very hard cricket ball at 90+ mph speeds. They’re allowed to deliver a limited number of “bouncers” -- fast balls that hit the ground well before they reach the batsman and thus bounce viciously and unpredictably up at the level of the batsman’s head.

It is estimated that he has 0.59 of a second to react. He may choose simply to duck under the missile (which may still hit him, but batsmen wear body padding and helmets), or he may try to score runs by swinging his bat to make contact with the ball. That’s what Hughes tried to do, and the slightest mistiming saw the ball hit him below his left ear -- an area unprotected by the helmet.

Hughes’ death brought on an outpouring of anguish and sympathy. Helmets were redesigned. Some critics suggested that bouncers be banned from the game -- after all, they were clearly aimed at the batsman’s body and intended to intimidate -- the threat of serious injury was implicit in the bouncer. Was that sportsmanship? Ironically, when English bowlers had first employed this “body-line” bowling back in 1932, it was the Australians who protested that it was against “the spirit of cricket.”

But that was 85 years ago. A new spirit now inhabits cricket, one that seems to say: Sportsmanship? Who cares? It may not be sportsmanship, but it is cricket. A recent survey of Australian cricket showed that the frequency of bouncers remains virtually unchanged from what it was before Hughes’s death.

A TV commentator had this to say: “If they take the bouncer out of cricket, I don't want to be involved ... When you start talking about taking bouncers out of the game, you lose the game. They are part of the game's drama.”

That argument should be familiar to soccer people. We hear a version of it every time any attempt is made to modify the rules by clamping down on violent play. You’ve heard them -- “What’s this? Ban the tackle from behind? Soon defenders will be afraid to tackle at all, and what sort of game would soccer be without tackling?” Or “You can’t penalize a player for using his elbows when he jumps, he’s just trying to get elevation. They must be allowed to do that.”

And so on. Always an excuse for some sort of dangerous play. Yet this is exactly where soccer should be looking at itself, asking whether there are alterations to the game that could reduce the risk of serious head injuries without damaging the excitement and appeal of the sport.

Of course there are. The two most obvious examples both involve goalkeepers.

• 1. Find a way to stop goalkeepers blindly and aimlessly kicking the ball downfield any-old-where -- by far their preferred mode of distribution. These long, high kicks -- at least a dozen in each and every game -- invariably lead to an ugly heading duel -- sometimes a short sequence of them -- in which the elbows start to fly. The very stuff of concussion injuries. Again, U.S.Soccer looks good here, having identified the problem, and banned young (under-10) keepers from punting the ball.

• 2: Ban -- immediately -- the goalkeeper’s apparent “right” to smash into opponents as he comes out to snare a high ball. Jumping, knee raised, into an opponent must get the red card that it so obviously deserves. Goalkeepers will have to learn to do things differently. I would be in favor of granting them total right to the ball within the six-yard box. Beyond that they have to behave like any other player, or pay the consequences.

I have already mentioned two incidents involving goalkeepers. But both are unusual. Vincent Kompany’s injury was caused by his own goalkeeper, Claudio Bravo, smashing into him. A pretty clear sign of just how reckless these goalkeeper collisions are. In the other example it was the goalkeeper, Hugo Lloris, who was injured.

Soccer & Concussion (Part 1): A Disgraceful Lack of Action -- Protocols are not enough

That this is brave goalkeeping I do not doubt. But it is also foolhardy and could easily result in a head injury for the goalkeeper.

The rule on “playing in a dangerous manner” is clear enough: “ ... any action that, while trying to play the ball, threatens injury to someone (including the player themself) ...” Any field player, stooping low to head a ball at a level where an opponent may reasonably believe he can kick it, runs the risk not only of getting kicked in the head, but of being penalized for dangerous play. Yet here we have a goalkeeper allowed to attempt to play the ball, with his head down much closer to ground level.

One thing needs to be underlined: no rule changes are necessary to punish the goalkeeper fouls I have mentioned. Goalkeepers jumping, with raised knee, into opponents (or a teammate) is already a serious foul. While diving at the feet of an opponent can quite definitely be punished as dangerous play. Yet these calls are never, or very rarely made by referees, who -- incredibly -- are much more likely to call a foul by the attacking player.

Why do referees not make these calls? Do they ever discuss them? What is their response when they hear, from the mouth of a TV commentator, that when a goalkeeper comes forward to grab a cross, he’s expected to “take out” anyone in his way? Do they ever consider whether the Rules statement -- “All players have a right to their position on the field of play; being in the way of an opponent is not the same as moving into the way of an opponent” -- really undermines that assumption?

From the evidence we see on the field, I would say that referees never think about such things. They simply make the calls the way they have been made for ever, allowing goalkeepers to do more or less as they like. Something a bit more thoughtful is required in this age of concussion awareness. And referees, who should be in the vanguard of those calling for it, are nowhere to be heard from.

But it would be unfair to heap blame only on referees. Because this is -- unfortunately -- yet another example of something that we might expect IFAB to be looking into. At the same time, we know full well that IFAB will never do that, because IFAB never does anything that could be considered forward-looking.

england, referees
12 comments about "Soccer & Concussion (Part 2): What needs to be done -- before the lawyers move in".
Read more comments >
Next story loading