“Over time, we have closely monitored the Development Academy combined groups to assess the impact on talent identification and development, especially at the ages during early adolescence where there can be significant physical differences, based on an individual’s maturation rate,” said Director of Scouting Tony Lepore. “From looking at the data and speaking with our Technical Advisors and club directors, we know that adding U-15 single age group to the program will not only expand the influence and player pool, but it will also help clubs streamline the learning environment and allow individual players to follow their own pathway.

"The expansion to U-15 single age will really help to provide a place for individuals born later in the year or talented late developers, similar to what we have seen with the addition of the DA U-13 single age group this season,” said Lepore.

The addition of a single birth year U-15 age group will add about 1,500 players to DA clubs and will increase total number of DA players in all age groups to more than 12,000.

“The addition of the U-15 age group is another important step to ensure players have the opportunities they need to develop on and off the field,” U.S. Soccer Development Academy Director Jared Micklos said. “We have all seen the benefits of the increased opportunities this season with the split of last season’s U-13/14 division into single U-13 and U-14 age groups. We believe the U-15 age group will be another avenue for clubs to further their player development efforts.” 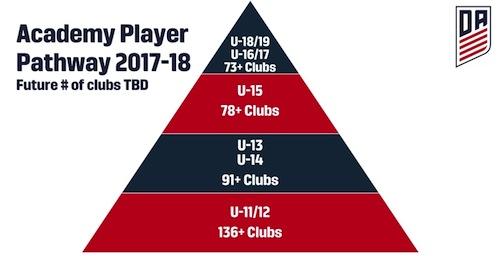 Age groups and number of clubs for the current season 2016-17: 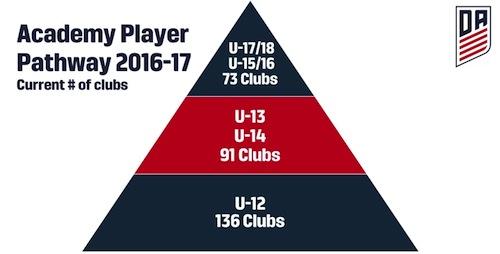 The U.S. U-15 boys national team, coached by Dave van den Bergh, is in its first training camp of 2017 with a 24-player squad in Chula Vista, California. The team, comprised of players born in 2002, played to a 3-3 tie against Tijuana Xolos U-17 team on Monday.

Two of the players -- defender Makenna Morris and midfielder Talia DellaPeruta -- played on the U.S. team coached by Mark Carr that won the 2016 Concacaf U-15 Girls Championship last year in Florida.