By Paul Gardner From the happiest of thoughts and memories about Roberto Cabanas to total bewilderment and sadness ... all it took was a few days.

The memories started with a brilliant goal scored by Arsenal’s French striker Olivier Giroud. His version of what has become known as a scorpion kick. A truly wonderful goal -- I can assume that most of you will have seen it, will have been amazed at Giroud’s skilfullness and smoothness as he turned a not very good pass to him into a superbly exciting goal.

Giroud was moving swiftly toward goal, the ball came in from his left, but it was a couple of feet behind him -- yet he was able to play it forward with the heel of his trailing leg, making solid contact, sort of hooking the ball forward over his own head to send it -- at speed -- crashing off the underside of the crossbar and into the net. 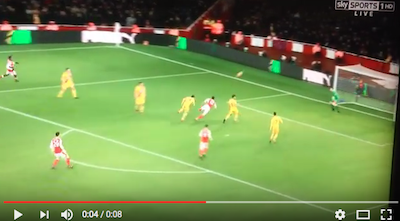 A breath-taking scorpion goal, a sudden flash of soccer brilliance defying even the wildest expectations ... pulled off with such ease and control.

And that was when, inevitably, my thoughts turned to Roberto Cabanas and the extraordinary scorpion goal that he scored for the Cosmos back in 1983. The only scorpion goal that I have ever seen, I do believe, performed live, right before my own disbelieving eyes. I don’t think we called them scorpion kicks in those days -- that term was associated a little later with the flamboyant Colombian goalkeeper Rene Higuita.

Cabanas’ goal had the same origin as Giroud’s -- a ball that came in behind him. Giroud was running purposefully into the penalty area, fully aware of what was happening, glancing to his left where he could see Alexis Sanchez preparing to cross the ball. Even though Giroud had to break his running rhythm, had to stutter step, he was always in control, looking back to see the ball make contact with his left heel, to direct it on goal. And all in -- what, maybe 2 or 3 seconds.

Cabanas played soccer rather differently than Giroud. For sure -- after all, Giroud is a 30-year-old veteran, Cabanas was s 22-year-old wonder-kid overflowing with a blinding talent that had you convinced you were watching the next Maradona. At age 22 Cabanas did not have, could not have, the almost intellectual coolness of Giroud. But he had abundant youthful energy, the  supple movement of his gymnast’s body ... and he had that secret, inborn, well of knowledge that gives all the great players their greatness, the instinct that breeds, suddenly, miraculously, their magic moments.

Like Giroud, Cabanas saw a headed cross coming (from teammate Angelo DiBernardo). Unlike Giroud, Cabanas completely misjudged the path of the ball, diving as though to head it, but far too early. While still airborne, some three feet off the ground, Cabanas, now unable to see the ball -- even his elastic body couldn’t twist that much -- still managed a mid-air contortion that enabled him to get his heel on to the ball and slam it forcefully into the goal. 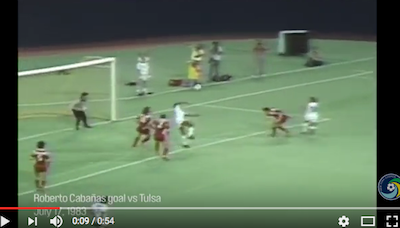 Exciting beyond any telling of it -- another of those short, sharp sporting moments, just a few seconds that challenge reality and bring on the wondrous beauty of the impossible. Utterly unforgettable.

And then, little more than a week after the Giroud goal, came another moment that challenged reality. A horrible harsh moment announcing the death of Roberto Cabanas. Just 55, dead of a heart attack. A sudden unexpected death, without any advance warning of trouble.

Watching Cabanas play was always a tonic for me -- the bubbling boyish enthusiasm that sparkled in everything he did, the constant promise of something daring, something different, or like the scorpion kick, something outrageous.

A game with Cabanas on the field was always a game that was likely to give us soccer with a smile. Off the field, only once did I encounter Cabanas not looking happy -- after a famous incident when Giorgio Chinaglia had punched Cesar Romero -- the other young Paraguayan on the Cosmos -- in the face during a practice session. Something Giorgio never explained, something Cabanas said he didn’t understand.

Actually, it would have made more sense had it been Cabanas who Giorgio punched. Because there was a goalscorer’s rivalry between the two. Chinaglia was the Cosmos goalscorer without any doubt -- 193 goals in 213 games is a phenomenal total. Yet Chinaglia was getting along in years, and here was this young super-talented kid -- that same year of the scorpion goal, Cabanas had scored 25 goals to Chinaglia’s 18, and had won the NASL’s top scorer and MVP awards.

Years later, when the NASL and the Cosmos had disappeared, I summoned up the courage to ask Chinaglia whether he had ever felt threatened by Cabanas’s goalscoring feats. He didn’t answer. Not in words. Instead, I got a look of withering scorn, telling me, I think, that I was an idiot to imagine that he would be scared of a 22-year old kid.

I was surprised, disappointed really, that Cabanas didn’t go on to become a world-class star. He played for eight different clubs, including America de Cali and Boca Juniors. Always a fan favorite, always a goalscorer. He had his World Cup moment in 1986 when he scored twice, enabling Paraguay to tie Belgium, and ensuring passage to the next round. But the breakthrough to super-stardom never happened.

My memory of Cabanas is of the sturdiest sort, of a smiling young man who gave me (and no doubt a mass of others) immense pleasure whenever I saw him play, and who helped me to understand that there are mysterious dimensions to soccer that will never be understood by those who insist on analyzing the hell out of it with their accursed charts and diagrams and schemes and formations.

Thank you Roberto for giving us the magic, the joy -- and of course the beauty -- that are so important to the beautiful game.