The top pick in the 2017 MLS SuperDraft is held by Minnesota United, which is expected to select Jeremy Ebobisse. The U.S. U-20 center forward is a year removed from college, having left Duke after his sophomore year and played last summer in the USL for the Charleston Battery.

This year's class of collegians headed to the pros is still deep -- between seniors and underclassmen signed to Generation adidas contracts, between players going into Friday's College Draft and signed to Homegrown contracts, between Americans and foreigners, specifically players from the German pipeline into college soccer and Ghana's Right to Dream program. All but one is committed to MLS.

1. ABU DANLADI (UCLA). The Ghanaian forward has been mentioned as a possible No. 1 pick, going back to his freshman year with the Bruins. Two years later, the junior has finally accepted a Generation adidas contract. He is generally regarded as the top player in the SuperDraft but may not go No. 1. He only played 11 games in 2016, due to injuries, but finished with a career-high seven goals. He moved to California to attend boarding school as part of Ghana's Right to Dream program that also produced the LA Galaxy's Emmanuel Boateng and the Philadelphia Union's Joshua Yaro, the No. 2 draft pick overall.


2. JULIAN GRESSEL (Providence). College soccer has seen influx of Germans who have spent time in the youth or amateur systems at top German pro clubs -- no longer a problem with the NCAA for the same reason players can play for MLS academies or USL teams before college. Creighton's Fabian Herbers (Philadelphia) and Timo Pitter (FC Dallas) both made the jump to MLS in 2016, while Gressel is the top German prospect in this year's SuperDraft. Gressel, the first Friar to earn first-team All-America honors in a decade, played in the Regionalliga Bayern after starting out at Greuther Fuerth. He hasn't hurt his case with his play in midfield at the Combine.

3. IAN HARKES (Wake Forest). Harkes is a midfielder, like his father, John. For many years, it was tough to live up to the expectations placed on him as the son of the former U.S. national team captain. But he captained Wake Forest to the 2016 ACC championship and the NCAA Division I final, where it lost to Stanford in a shootout. His career stats are only nine goals and 18 assists 82 games, all starts, but he was the best player in college soccer in 2016, winning the MAC Hermann Trophy. D.C. United holds Harkes' MLS rights as a Homegrown player, though he has not announced a decision about his future. Europe is a possibility. A long shot would be joining his father, who now coaches the USL's highly popular FC Cincinnati. 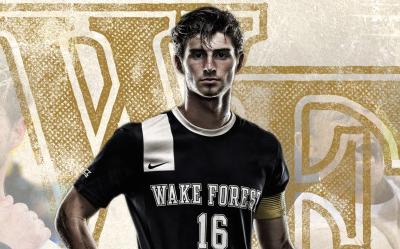 4. JACORI HAYES (Wake Forest). The Demon Deacons had quite a team in 2015 and 2016. They lost to Stanford both years -- in the quarterfinals in 2015 and final in 2016 -- but sent Jack Harrison to New York City FC after his freshman year and will send Hayes and Harkes to the pros this year. Some are concerned that the 5-foot-7 Hayes could get lost in the physical world of MLS, but he's being tipped a possible pick by Atlanta United, which holds the No. 2 and No. 8 picks in the first round.

5. DANIEL JOHNSON (Louisville). Johnson has been the breakout star of the Combine, impressing everyone with his passing out of midfield, but he was hardly an unknown quantity around the ACC, where he played for the Cardinals for two seasons after transferring from Maryland. He scored five goals as a junior and added two goals and five assists as a senior. He moved to England, where he played for West Ham United's youth program, when he was 13 but returned to Atlanta, where he played for Georgia United, three years later when he didn't qualify for a work visa.

6. JONATHAN LEWIS (Akron). Lewis was a late addition to this year's Generation adidas class, signing after his freshman year at Akron, where he led the Zips with 12 goals. He has only played the second halves of the first two games at the Combine, but he has already scored three  goals for Team Tango, tied with Bermudan Zeiko Lewis (Boston College) for the most goals. He attended a Jamaica U-20 camp early in 2016  but is now playing with the U.S. U-20s. He spent time in the Chicago Fire academy but didn't qualify  as a Fire Homegrown player after returning home to Florida, where he scored 17 goals in 21 games for Kendall SC in the Development Academy last season.

7. NICK LIMA (California). The Golden Bears have produced their share of MLS stars in recent years. Three Cal players -- Stefan Frei, David Bingham and Steve Birnbaum -- are in the U.S. national team camp that opened on Wednesday. Lima could be the next Cal player to start in MLS. The San Jose Earthquakes signed the Castro Valley, California, native to a Homegrown contract -- just the second they've ever extended -- after four years at Berkeley and he could challenge for a starting job at outside back, where the Quakes need help. “From what I’ve seen of Nick, both at Cal and in training sessions with the first team," says head coach Dominic Kinnear, "he’s capable of playing both sides of the field and likes to get forward and attack."

8. CHRIS ODOI-ATSEM (Maryland). No college team was deeper in 2016 than the Terrapins, who finished as the No. 1 team in the Soccer America rankings but were upset by Providence in the second round of the NCAA Tournament. Giant defender Alex Crognale signed as a Homegrown player with Columbus, German transfer Gordon Wild was a candidate for a GA contract, Eryk Williamson spent December with the U.S. U-20s in Costa Rica, while Sebastian Elney, Amar Sejdic and Jake Rozhansky are all well-known talents. The soft-spoken Odoi-Atsem is a converted forward who moved to right back after beginning his college career as a center back. Young outside backs are sought after in MLS, so he should go early in the SuperDraft.

9. MILES ROBINSON (Syracuse). The 6-foot-2 Robinson has been mentioned as a possible No. 1 pick along with Ebobisse and Danladi. He followed his older sister, a track star, to Syracuse from Arlington, Massachusetts. Robinson played for FC Bolts Celtic under Brian Ainscough, the former Northeastern coach, but was not well known nationally. That changed when he helped the Orange reach the final four as a freshman in 2015. He has been an integral part of the U.S. U-20s ever since and is challenging for a starting job at center back in a group that includes Cameron Carter-Vickers, Erik Palmer-Brown, Tommy Redding and Justen Glad, all pros.

10. JACKSON YUEILL (UCLA). Yueill grew up Bloomington, Minnesota, and played for the Minnesota Thunder Academy, where the program's big star was Mukwelle Akale. After high school, Yueill and Akale, who often trained together under Akale's father, Ralph, went their separate ways -- Yueill to UCLA and Akale to Spanish club Villarreal, where's now on its "C" team. Last September, Yueill set an NCAA record with three assists in 32 seconds in a match against Akron. After two seasons in Westwood, Yueill accepted a Generation adidas offer and joined HG signings Reggie Cannon (FC Dallas), Jose Hernandez (Real Salt Lake) and Danladi in leaving early. Yueill and Akale played together on the U.S. U-18s and could be reunited on the U.S. U-20s later this year. They last played for the U-20s when they won the 2016 NTC Invitational on a team that also featured Ebobisse and Robinson.