For some time now I have been wondering about the soccer term “clearance.” A term, admittedly, that I have been hearing, and using for decades without giving it much thought.

But what, exactly, does the term mean? My pondering reached the point at which I decided that it didn’t mean anything at all. Or at the least, that it was a sort of catch-all word that lumped together a bunch of soccer actions, not one of which deserved to be graced with such a healthy-sounding word.

My slapdash use of the word in the past was always to denote a defensive play, a hefty kick downfield, quite often a desperation kick, likely a high ball without any aim at all, going anywhere, maybe into touch, probably to an opponent.

A Hail Mary sort of play without the slightest touch of thought to it. The lowest level of soccer playing. Definitely not a contribution to the beautiful game.

That’s not quite right, though. There was a thought there -- simply to whack the ball as far away as possible, to “relieve the pressure.” But it seems to me that most of the time it doesn’t work anyway. So often the clearance is used when a team is defending desperately, with everyone pulled back. So logically, when the ball is thumped downfield there is no teammate there to corral it, so back it comes, pronto.

I stopped using the word because it seemed to me that it is inaccurate enough to be termed a lie. Lousy soccer should not be hidden behind salubrious words.

The word clearance, is obviously English. I wondered if other languages used a similar word. I am familiar with the Italian disimpegno, a “disengagement,” but it’s not a term I see much used in the Italian press. For the French there’s degagement, which is similar. The Spanish-speakers have despejar, which does mean clear.

I gave up on this after a while because it is obvious that the English got there first with their own special vocabulary, and most countries have simply followed their lead, often using the English word.

I have in my possession a number of dictionaries that give soccer terms in various languages. “Terms used in Association Football” was published by FIFA (in 1974), so that ought to be authoritative, I thought. (Actually, I wasn’t too hopeful, because this multi-lingual glossary contains the word “capering” as a word the English use -- apparently to describe dribbling). Whatever, “clearance” is not in the official FIFA book.

More helpful is the Praxisworterbuch Fussball, published in 2008, with the cooperation of UEFA. Clearance is there, with its German equivalent Befreiungsschlag. But what delighted me here was that the English word was given a synonym -- Syn: hoof (coll.)

Got it in one. That more or less confirmed my view of the word -- that it was a meaningless term describing an unworthy action.

But clearances were not to be banished from my thoughts. Some time during the 2016 MLS season I looked up some game stats on the MLS website. And found to my dismay or disgust or just disdain that “clearances” was in the official list for each game.

For instance, I discovered that in that pretty awful MLS Cup final, Toronto had 35 clearances, Seattle had 39. I really couldn’t see what, if anything, those stats were telling me about the game. Come to that, what is the MLS definition of a “clearance”? Is having more clearances considered a good thing? Or are you better off with fewer clearances? 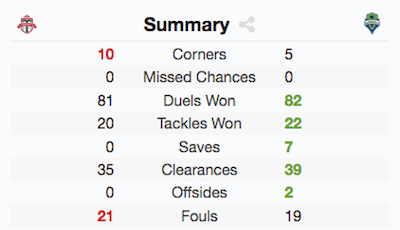 I asked, and was informed by an MLS spokesperson that MLS used the definition used by Opta, a stat company that employs hordes of people to track, with considerable diligence, games all over the world.

• Clearance (Won): A ball is cleared out of the danger area and finds a teammate or goes out of play (both by head and foot).

• Clearance (Lost): Same as Clearance (with regards to head and foot) but is lost if the ball goes to an opposition player.

And how am I not going to have a major objection to that? Because it does answer my question about the value of clearances, but it hides the answer. All we get in the stat column is “Clearances,” when the definition makes it clear there are good (Won) clearances and bad (Lost) ones. Of what value is the stat if we don’t know those subtotals?

There is already a similar absurdity with the “Possession” stat. Anyone who doesn’t know by now that more possession is an unreliable guide to who wins has not been paying attention. Possibly a simple breakdown of that stat, giving us a subdivision of “Possession in attacking third” might help.

But even knowing the totals of good and bad clearances may not help much. I could make a pretty convincing case that “Clearances (Lost)” should not be considered clearances at all -- why should they be when the ball comes straight back?

I think maybe Lost clearances should have their won category -- we could call them Hoofers. Good clearances -- those “won” -- surely also need refining. There is, after all, a big difference between a ball that is passed out of a defense under pressure and one that, hoofed out, luckily finds a teammate.

But is it within the skill of the game loggers to decide what was coolness under pressure and what was sheer luck?

Given all this uncertainty surrounding the stat scene -- an area that is supposed to dispense with opinions and assessments and subjective values and such like, and give us the purity of a mathematical figure, I was surprised to find a story that quoted one of Opta’s managers as claiming: “What we’ve had as a clearance has always been the same, and will not change.”

Opta is an English company. Its definitions will be influenced, possibly subliminally, by the English way of playing the sport, by English attitudes.

I would say that cataloguing “clearances” as a useful contribution to understanding the sport is an example of English attitudes. I doubt any other country would find them helpful. Scotland, maybe. The present category -- just plain “Clearances” -- strikes me as being quite worthless.

But ... if the clearance totals were subdivided into good and bad on the stat sheet, if we knew more about the exact definition of a clearance (for instance, does it include those abominable goalkeeper punts?), we could probably get some useful information. For example, how many bad clearances does Barcelona average per game? How many does the English national team rack up? Are bad clearances always associated with a losing team?

Tab Ramos, in a recent interview with Soccer America’s Mike Woitalla, added elegant clarity to the murky clearance question: “It is important that younger age groups believe that punting or clearing a ball is always just giving the ball away.”