Abu Danladi's mother was unable to come from Ghana to join him in Los Angeles and watch him become the No. 1 MLS SuperDraft pick because of visa complications. But Danladi was surrounded by plenty of family -- his American family -- to celebrate his move to Minnesota United.

Danladi, who played three years at UCLA, moved to California from Ghana at age 16 through the Right to Dream program that seeks opportunities abroad for promising young Ghanaian talent. But the key to Danladi’s successful journey from a small town in Ghana’s western region to California, to UCLA, and to MLS was the efforts of two couples, David and Kimberly Barenborg and Helena and Cris Avery – and their connections to the Dunn School in Los Olivos, California.

Because of the 2007-08 economic crisis, the Dunn School was discontinuing its scholarship program that had brought other African students to the school. After hearing a moving graduation-day speech by Sudan refugee Nyuol Tong, Helena, a teacher a Dunn, asked if she couldn’t transfer her family’s scholarship to an African student. That wasn’t possible.

“She saw how the African students made such a dramatic impact on the school,” said Cris Avery, “how they lifted the spirit of the school.”

The Barenborgs ended up sponsoring Danladi’s education at Dunn, which started in 2011, while he lived with the Avery family. Danladi also spent holidays with the Barenborgs in Washington state.

“There was a lot to adjust to culturally,” said Danladi. “But I had so much support from my host family and the school and the community.”

The Averys have three children. The oldest, Josh, was leaving for college when they decided to host Danladi.

“He came to our family and just jumped right in with everything. There was a little shell shock in the first week or two. We had a lot of family dinners together to welcome him into our family.” 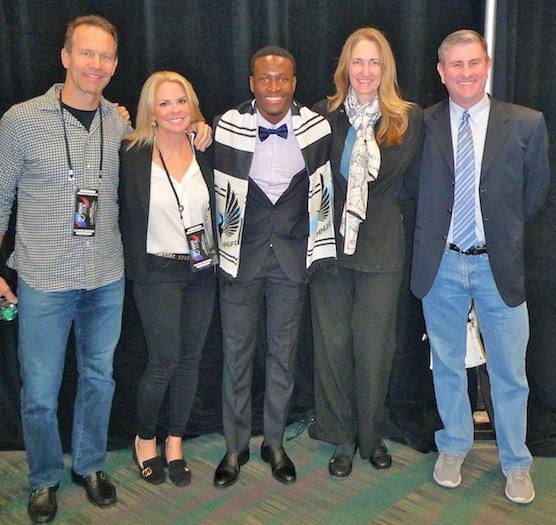 Cris said adjusting to new food was a challenge. They would slowly introduce different items to see what he might like.

“And when you found something he liked,” said Cris. “He’d want it everyday. He loved the hand-breaded chicken sandwich at Carl’s Jr. One day he asked me when his allowance day was, because he was going to buy two of them on that day.”

At home, the Averys got Danladi to enjoy a wide variety of cuisine and he became a very good cook. In Ghana, Danladi’s breakfast routine usually consisted of the oranges and mangoes he and his friends would pick off trees. Not always was there food on the table when he came home for lunch

“When there’s no food,” he said. “I’d go out and play more because the more you play the more you forget that you’re hungry.”

He played barefoot soccer growing up -- “like all Ghana kids” – and joined a team at age 10. Upon his arrival in the USA, he joined Santa Barbara SC.

“The first weekend he came to live with us,” Helena said, “he played in a soccer game and my oldest son and I, after he scored an amazing goal, we just looked at each other and said, ‘this is going to be fun.’”

Danladi also starred at Dunn and was the 2013-14 Gatorade National Player of the Year. He could have gone pro after high school, and after his freshman and sophomore seasons at UCLA.

“At times, there were some struggles,” said Cris. “He comes from a family that is needy. He saw the need and there was pressure chasing his education, which was a priority, balanced against that he could really help his family out if he went pro.

“But most important was that he got an education and a degree from UCLA for later in life after soccer.”

So Danladi stayed for three seasons, earning enough credits to put a diploma within reach while he begins pro career as a forward with the expansion Minnesota United.

“He really did a great job in college because he wanted to prove that he could be successful student, and not just a successful college player,” said Helena. "He really did that and he learned a lot it.”

"Abu is very worthy of being the No. 1 draft pick,” said UCLA coach Jorge Salcedo. “His ceiling as a player is very high and I have no doubt he will be successful in MLS and at Minnesota United. I really enjoyed having Abu at UCLA because of the quality of his character."

During his five years in the USA, he was only able to go home to Ghana once, to visit his parents and his four brothers and sister. But only for a week, because of visa delays.

His family tried to watch the online streaming of the SuperDraft.

“There’s always blackouts and bad connections,” Danladi said. “They were able to connect and watch, but not until after I was picked.”

Through a dodgy FaceTime connection, he was able to share the good news with his family.

“I really hope that they’ll be able to visit and watch me play in Minnesota,” he said.