Still to be ironed out are lots of labor issues. Commissioner Jeff Plush, now in his third season, talked with the media after the NWSL College Draft. 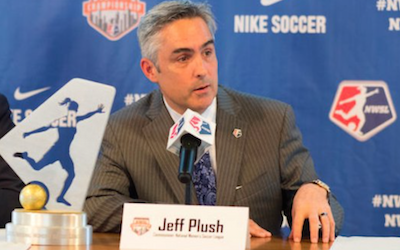 The big unknown is when the U.S. women's national team's union and U.S. Soccer will reach a new collective bargaining agreement that covers their participation in the NWSL. Plush said those talks of which the league is not directly a part of will not affect the opening of preseason camps.

There is no CBA covering all 200 players in the league, but Plush said the first priority in 2017 will be to raise the salaries of players at the lower end of the salary scale.

“We'll be coming out with, in fairly short order, what the minimum and maximum salary increase, cap will be for this year, but it will be quite a bit [higher],” he said. “And we'll continue to, to be very, very clear, operate in a manner that will be prudent for the long-term stability of the league. And that has to be the priority for us.”

Plush said league owners feel no pressure in light of the moves to Alex Morgan, the league's biggest star, and Crystal Dunn, the 2015 MVP, to France, and the decision of Kadeisha Buchanan and West Virginia teammate Ashley Lawrence, college soccer's top two seniors, to sign with French clubs.

“Players absolutely earned that right to make decisions and do what's best for themselves,” Plush said. “And every person is different. Sometimes it's a soccer decision. Sometimes it's a financial decision. We would be thrilled to have Ashley and Kadeisha in this league. I also know there are a lot of great players joining this league today. And I have a lot of confidence that we're still the best league in the world. But to stay there, we can't be complacent. We have to continue to invest more in our players, invest more in our training environments. And we're committed to getting better.”

On other subjects, Plush had this to say ...

2017 Season.
SCHEDULE. “I can confirm 24 games, absolutely. Which is great. But it adds some complexity. We need more dates and more buildings and some of our – whether it’s Harvard [home of Boston Breakers] or whether it’s Rutgers [Sky Blue FC], with busy schedules themselves, it makes it a little complicated, but we’re excited about more games in some great venues."
TELEVISION. "I have very high level of confidence that we will have a TV deal that’ll be significantly more robust than we’ve had in the past."
SPONSORSHIPS. "I have a high level of confidence in what we will come out with on the broadcast side of things, which will lead to commercial opportunities for us.”

2018 Expansion.
VANCOUVER. "I would tell you that we've had very good conversations with them, fantastic market, great infrastructure with the Whitecaps, with everything they've done on the academy side. So it's a very attractive opportunity, but I wouldn't give a timeline on it.”
LOS ANGELES. "You have LAFC who’s about to launch and a stadium that’s coming out of the ground not too far from here with a fantastic ownership group and someone like Mia [Hamm] specifically who would be phenomenal, no question. And then the Galaxy have the most decorated MLS club in league history, so I think we have some great potential targets here in this market. And we’re friends with them and I’ve been fortunate to know the Galaxy guys for a long time with my MLS background, so we’ll see how that evolves."