NASL's Rishi Sehgal: 'The task is not small'

The NASL finished its sixth season with 12 teams in November. Within a month, it was looking at a league with as few as six teams. But will go forward with eight teams in 2017 after it received provisional Division 2 sanctioning from U.S. Soccer on Jan. 5.

Interim commissioner Rishi Sehgal, the league's former director of business development and legal affairs, said in an interview with Soccer America that the turning point for the league was an owners' retreat held on a farm outside Atlanta in September at which they agreed on several short-term goals and began developing a vision for the league.

The two short-term goals were to end its relationship with Traffic and stabilize the league.

Traffic, which played a central role in the soccer corruption case involving Concacaf and Conmebol, at one point propped up NASL teams in Atlanta, Fort Lauderdale, Minnesota and Carolina. Its last investment in the NASL ended when the league bought out Traffic’s Class B shares in November 2016.

Stabilizing the league was a more fluid situation. Minnesota United had long since been approved as an MLS expansion team for 2017. By September, the Tampa Bay Rowdies and Ottawa Fury both told the NASL they wanted out. The Fort Lauderdale Strikers and Rayo OKC — both foreign-owned — had problems all season. And there was a question of whether the New York Cosmos and Jacksonville Armada would go forward.

The Cosmos situation was resolved when Rocco Commisso bought the club after he received assurances that the NASL would maintain its Division 2 status. Sehgal said there were local owners who could have bought the Armada, but the NASL owners didn’t want to rush into a deal and agreed to fund the team in the short term.

“Our owners said, ‘Let’s slow this process down,” he said. "'We are committed to this league going forward. We can commit the resources to do it. We want to do it because we believe in the market. And we believe in the league.’”

Sehgal says the key to turning around the NASL is for its clubs to adopt a more collaborative effort with each other and other soccer partners.

"We had out first board call since being sanctioned and the owners committed to going forward a few days ago,” he said. "It was 100 percent evident there was a change in mentality.”

The NASL has operated with teams allowed to spend as they wish, but Sehgal says that will change as the league works to protect the competitive balance of the league.

“We live in greatest free-market country in world," he said, "but we have a lot of regulation in business and in government. We need that in our business. We can be free-market but regulation is good. It will eliminate market inefficiencies.”

The Cosmos won three championships in four seasons but lost a reported $30 million and almost folded. Without committing to limiting club spending, Sehgal says there will be "consequences," but it gets away from what he believes is the most important issue the NASL faces. 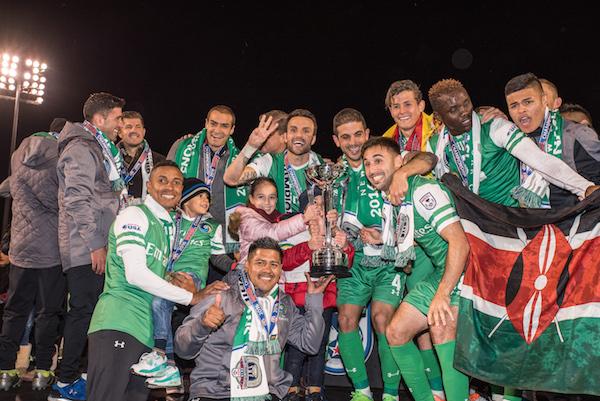 “Our biggest priority," he said, "is winning over the hearts and minds in their communities."

Sehgal says the working assumption is that the league needs 12 teams in 2018 to again receive Division 2 sanctioning. He says the NASL could have expanded to 12 teams for the spring or fall seasons in 2017.

The NASL's expansion record isn't terrible. The San Antonio Scorpions in 2012 and Indy Eleven in 2014 led the league in attendance in their first seasons. But Rayo OKC folded after one season, and the Armada's problems were evident early in its second season.

Sehgal insists turning down investors gung-ho on joining the league was not an easy conversation to have with them in the past but that will change. That makes adding four more teams in a year a tall order for the NASL.

Atlanta -- where a new MLS team will start in 2017 -- and San Diego -- where a USL team is rumored to be starting up -- have been NASL expansion targets, but Sehgal says the league will have to think long and hard about the moves.

The good news is that the NASL -- or other leagues -- doesn't lack for possible new markets into which to expand.

"Every sizable market in the country has wealthy investors interested in operating a team at some level," Sehgal said. "The demand is there. The sport has not reached the tipping point on the professional side."