If VfL Osnabrück keeps up its fine form, chances are good that it will win promotion to the German second division. Its head coach is American Joe Enochs, who left California 22 years ago to pursue a pro playing career after college ball at Sacramento State. 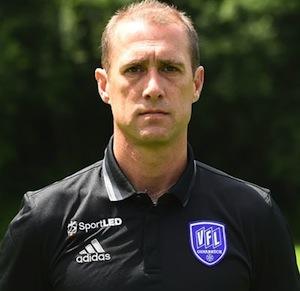 Enochs hails from Petaluma, a city of 55,000 that lies 40 miles north of San Francisco. He arrived at VfL Osnabrück via FC St. Pauli in 1996 and by the time he retired in 2008 played a club record 376 games for Osnabrück.

"He was loved by the fans, a record-setting player and successful youth coach," is how VfL's web site described Enochs, who is one of only three players in the 91-year history of the team to be honored with a farewell game. By then, Enochs had already been on a coaching path. 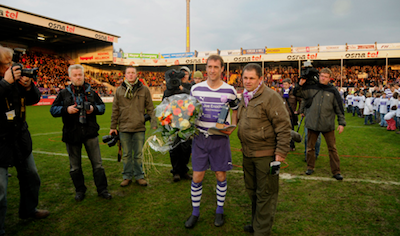 “I was the type of player who was asking the coach questions, writing things down, taking notes,” says the 45-year-old Enochs. “And we had conversations with the club near the end of my career whether I would play another year or start coaching. It was clear I would stay with the club in one capacity or another.”

Osnabrück, which lies 25 miles east of the Dutch border, has a population of 162,000. It’s the hometown of "All Quiet on the Western Front" author Erich Maria Remarque -- and Enochs felt comfortable in the city from the day he arrived.

Enochs’ wife, Gunilla, whom he met shortly after he arrived in Germany, grew up in Osnabrück and they now have daughters ages 16 and 12.

During Enochs’ playing career, VfL Osnabrück won second-division promotion three times. In September of 2004 the defensive midfielder's goal in a German Cup game against Bayern Munich, a long-range rocket that beat goalkeeper Oliver Kahn, was the Sportschau Goal of the Month: 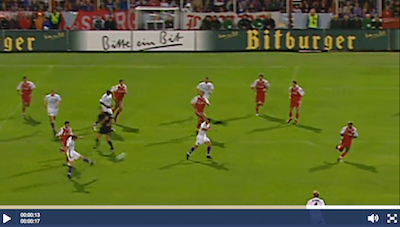 Osnabrück was relegated back to the third division the season after Enochs retired while he started coaching its reserve team, a U-21 squad. During the six years of coaching the reserves and one year with the U-19s, he got of all the German federation coaching licenses and the FIFA Pro license.

He took the first-team helm near the start of the 2015-16 season following two straight wins as interim coach to lift the team out of the league cellar. He guided the Osnabrück to a fifth-place finish in his first season.

At the halfway mark of the current season, Osnabrück is in third place, three points behind leader MSV Duisburg and one point behind second-place FC Magdeburg.

“Ten of the players' contracts ran out before this season, so it was the first time I got to put the team together myself,” he said. “Our focus was on young German talent. I’ve got players who played for me when I coached the youth teams who are now getting playing time and I love giving the kids a chance to show themselves. …

“I’m just happy with what I’m doing. I love what I’m doing everyday. I’m very fortunate that the club gave me the opportunity to stay in the club when I stopped playing.”

Enochs did prepare for a career without soccer. He and a friend opened a restaurant and bar, the Joe Enochs Sports Bar, nine years ago. 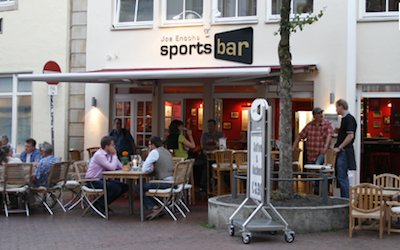 “Toward the end of my career we were trying to figure out what we were going to do,” he said. “I didn’t know the coaching was going to take off like it did. We wanted something to fall back on.”

He worked in the bar during day and coached the U-21s in the evening. Then checked in again after practice to make sure all was in order. Even that didn't take him far from soccer.

“We had games on the TVs 24/7,” he says. “So I’d watch soccer while I was working. And I met a lot of people. And talked to a lot of people who would share stories about my playing days. It was a fun time. … But when I took over the first team, there was no way I was going to keep working at the bar. My business partner quickly agreed on me getting out of the business. … As a professional coach, I stay out of bars now.”

The bar, in the city’s Altstadt (old town), still has Joe Enochs' name. But he’s busy trying to get VfL back into the second division.