When Nicolas Lodeiro was negotiating with the Seattle Sounders about moving to MLS during the Copa Centenario, he turned to Uruguayan teammate and close friend Luis Suarez to help him translate. Now, Lodeiro is pumping up Suarez as a future Sounder. 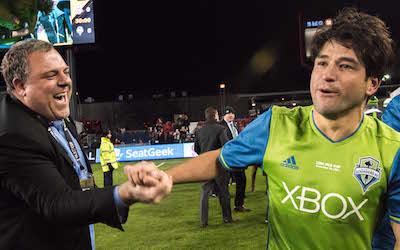 Lodeiro says a move by the Barcelona star to the Sounders isn't so far-fetched.

“It’s just a matter of a phone call, a phone call away,” Lodeiro said at MLS Media Day. “He already makes jokes that he’s coming to the league. He’s already a fan of Seattle.”

Suarez was cheering for the Sounders in MLS Cup, sending a good-luck message to Uruguayans Alvaro Fernandez and Lodeiro before the final at Toronto.

Lodeiro said knowing the Sounders had never won MLS Cup was motivation to come to Seattle from Boca Juniors.

"My objective," he said, "is to always leave my mark, make history."

Lodeiro was named Newcomer of the Year after playing just 13 regular-season games. He finished with four goals and eight games in leading the Sounders from ninth place to fourth place and into the playoffs, where he scored four goals in six games.

Lodeiro was just the third mid-season signing to win the award after Federico Higuain (2012) and Darren Huckerby (2008).

"All of the credit for this award goes to Nico, who has been arguably the best mid-season addition in the history of this league," said

Sounders general manager & president of soccer Garth Lagerwey, who was on the other end of the phone when Lodeiro handed it to Suarez, credited Lodeiro's preparation before coming to Seattle for his fast start. But Lodeiro admitted he was surprised by a lot about MLS.