Bodo Menze, the architect of the Schalke youth program, spoke to us about some of its key aspects, and provided an update on its Americans. 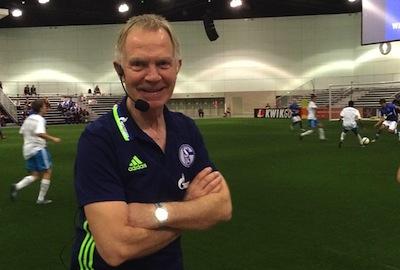 At ages 10 and younger, the teams do not use referees.

“At first, the referees said, ‘If we’re not there, the soccer will fall apart,’” Menze said. “That was not the case. The children are self-regulating. The children can do it. They have an amazing sense of justice. They know what is right or wrong. It works.

“If there are complaints with an opponent they think is taking advantage, if there are arguments, we always tell them the same thing, ‘Respond by scoring.’

“They learn to control their tempers and direct their emotions into a positive. They learn not to respond to frustration by lashing out at the referee or making a tackle that gets them a red card. Just put it in the net! They become the master of their emotions. And the coaches learn not to interfere.”

Neither coaches nor parents can complain, or abuse, the referee, thus keeping the focus on the children's play.

Menze instituted small-sided games in the late 1990s and a major part of the program is its communication with parents. He put up barrier tapes at game fields to confine the parents and there’s no tolerance for screaming from the sidelines.

“We have very clear rules that we discuss them with the parents so they know what we expect of them,” said Menze. "And we explain clearly to them what we're doing." 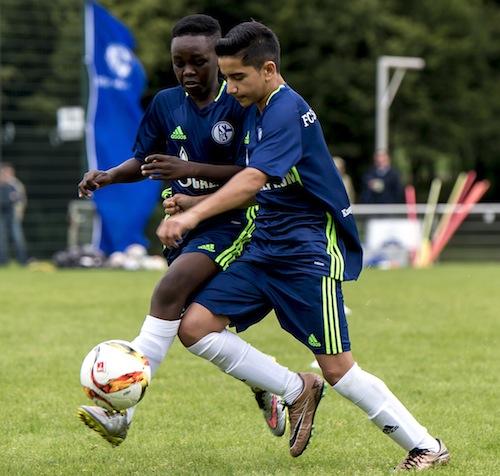 Action from the Schalke 04's youth program, the "Knappenschmiede."

For the parents of the older children:

“Sometimes when a player makes it to our top youth team [A-Jugend],” Menze said, “the parents think that means it’s a given he’ll make it to the Bundesliga team, and that attitude gets passed down to the player.

“It is of utmost importance that the players remain well-grounded and understand just how many challenges are still ahead. And we make great efforts to communicate this to the parents.”

Gelsenkirchen lies in the Rhine-Ruhr region, which with more 11 million people is one of Europe’s most densely populated areas. The 4,400-square mile region -- four-fifths the size of 3.6 million-population Connecticut -- is home to five Bundesliga first division and two second division teams -- providing Schalke with plenty of youth talent to scout and good competition.

“With clubs nearby like FC Cologne, Bayer Leverkusen, Borussia Dortmund, VfL Bochum, Arminia Bielefeld, Borussia Moenchengladbach -- we’re guaranteed that not one single Saturday or Sunday goes by without our players having a strong opponent.”

Schalke provides a shuttle service for its players to and from its facilities. It partners with a nearby school, enabling them to practice and attend school before taking the shuttle home.

“We know that very few players will end up becoming professional soccer players so we emphasize education and on making them well-rounded individuals,” Menze says.

While Virginia product Taitague is set to sign with Schalke when he turns 18 in February, Southern Californian Wright and Texan McKennie moved to Schalke last year and have been playing on its U-19 team, which is first place of the U-19 Bundesliga West standings. Wright, who has nine goals in 13 U-19 games, saw first-team action when he spent the Bundesliga winter offseason at its Spain training camp.

“I watched Wright in important games against our archrival Borussia Dortmund and Bayer Leverkusen,” Menze said. “At Leverkusen, he was dynamite, scored two exceptional goals in the second half, with his right and his left. From my view, you couldn’t say whether he was right-footed or left-footed. He’s fast and dynamic. But he’s inconsistent -- can fade in and out. The focus on his development will be consistency.”

McKennie is captain of the U-19s.

“McKennie plays the No. 6, a defensive midfielder, and is ever-present,” said Menze. “He’s very focused. Not the biggest but has good athleticism and strong in the air. And he’s a leader. Taitague just arrived and my first impression is he’s technical player.2017-01-22

“They’re three players in different positions who bring unique attributes, which bodes well for the team.”