Goalkeeper Dino Zoff, at age 40, helped Italy win the World Cup in 1982. Egypt's Essam El Hadary, at age 44, has shut out every foe so far in Gabon and is aiming to win his fifth Africa Cup of Nations. 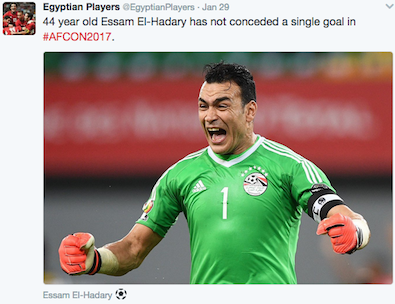 Egypt has won the Africa Cup of Nations a record seven times since the biennial competition launched in 1957, but the Pharaohs failed to qualify for the last three tournaments.

After Egypt lifted its last crown in 2010, the nation’s soccer hit a crisis. More than 500 fans were injured and 74 people died in the Port Said Stadium riot. That prompted a one-year shutdown of Egyptian Premier League, during the time when American Bob Bradley was head coach of the Pharaohs.

Last June, with El Hadary in goal earning his 144th cap for Egypt, the Pharaohs beat Tunisia, 2-0, to clinch a spot in the 2017 Africa Cup of Nations. That game marked a comeback for El Hadary, his first action the national team in a year.

"Essam was not on our shortlist to be called to the national team but the form he has been in for his club Wadi Degla forced us to call him," Egypt goalkeeper coach Ahmed Nagy said at the time.

El Hadary entered the 2017 Africa Cup of Nations in Gabon as Egypt’s No. 2 keeper. When Ahmed El-Shenawy injured his shoulder in the opener against Mali, El Hadary entered and at age 44 became the oldest player to appear in the competition.

Egypt had made to the semifinals and faces Burkina Faso on Wednesday. The Pharaohs didn’t get there with attacking prowess. While El Hadary went without conceding a goal, Egypt finished atop Group D after a scoreless tie with Mali and 1-0 wins over Uganda and Ghana. The Pharaohs beat Morocco, 1-0, in the quarterfinals.

If Egypt beats Burkina Faso it faces the Cameroon-Ghana semifinal winner in the final. El Hadary is aiming to claim his fifth Africa Cup of Nations title. He was a backup when Egypt won it in 1998, but was named to the all-Tournament team when it won in 2006, 2008 and 2010.

Didier Droga, whose penalty kick El Hadary saved in the 2006 Africa Cup of Nations final shootout, called him “the best goalkeeper I ever faced.”

"He is first on to the training field and the last to leave," says Egypt’s Argentine coach Hector Cuper.

However Egypt fares at the Africa Cup of Nations, El Hadary has made it clear he’s not done yet.

"I want to play at the 2018 World Cup too," he said. "We have the chance to qualify for the biggest competition of them all for the first time since 1990. I want to be a part of that and wear my country’s jersey there.”