Where soccer fails, the NFL gets it right

An impertinent book, this. The title and subtitle tell you succinctly what you are getting: “The Ugly Game -- How football lost its magic and what it could learn from the NFL.”

Soccer bowing to football? Preposterous! Not at all says author Martin Calladine. In his reckoning, the battle between the two sports is already over, and football has come out way ahead.

Calladine, growing up in England, immersed in English soccer, has abandoned his attachment to that sport and is bursting to tell everyone how tedious soccer has become and how vastly superior the Yankee version of football is.

I know nothing about Calladine. He does tell us that he loves stats, and there are quite a few graphs and charts in this book, most of which bore the hell out of me (meaning, quite possibly, that I’m too mathematically retarded to understand them).

I’ll overlook the stats. Because Calladine makes a lot of good points about the decline of soccer’s appeal, and he has a lot of fun making them. True, it’s all rather personal; a close relationship between Calladine and soccer has been betrayed and as he sees it, it is soccer that has perpetrated the betrayal, with Calladine the jilted lover. 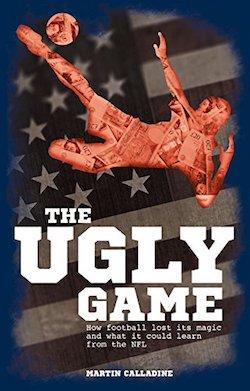 Clearly an intelligent bloke, Calladine sorts out, with humor and occasional spite, soccer’s failings and stupidities. He feels -- pretty strongly -- that the sport has been allowed to deteriorate into a weak imitation of itself, a sport that has lost its personality, a sport without leadership.

The catalog of soccer disasters is nicely contrasted with the way that the NFL, according to Calladine, gets things right.

(Talking of stupidities, Calladine has some of his own to add. He quickly (page 3 of the Introduction) tells us “Despite my love of American sports, I’m not sure I could ever feel comfortable using the word ‘soccer.’” Oh, come on, Martin -- you do know that the word was coined in England itself? So what’s the problem here?)

But that’s merely an annoyance. On the whole Calladine does a pretty good job of pillorying the poverty of the English soccer vocabulary. His chapter on the banalities of English TV commentators is a rollicking read -- from “the intellectually subnormal level of football broadcasting” through “we’ve bred a generation of pundits who, if they lived in the US, wouldn’t be able to get hired by a local paper to cover high school sports” and on to “football pundits have an almost complete inability to say anything interesting about the game.”

Right on -- we know all about that, Martin -- we have to put up with those guys contaminating the airwaves here too.

Calladine links the hopelessness of the pundits with the hopelessness of English soccer, especially the English national team: “Would I really want an end to the England team? Well, either that, or they agree to play properly and stop spoiling the World Cup for me.”

But Calladine already knows the World Cup has been spoiled by soccer itself. Mostly by being not very exciting and by a shortage of goals -- “goal-wise, major football finals have tended to produce slim-pickings.” They are “cagey, low-scoring games” and compare very poorly with the “openness and offensive intent” seen in Super Bowls.

I’m in total agreement and have said so repeatedly in this column. Calladine makes a few suggestions that he thinks might pull soccer back from its impending demise, but they seem half-hearted. Of course, I disagree with most of them, though he is surely right to include larger goals among them -- an idea that has been often (and, I think, wrongly) ridiculed in the past. Ridiculed because apparently no one at the top levels of soccer actually pauses to think about the sport.

Should they ever begin to do that, they could do worse than start with this Calladine contribution: “woven into its [soccer’s] very design are a set of assumptions about human physical limits that are centuries out of date. Players now are too big, too strong, too quick, too well-coached, too tactically aware and too well rewarded for finals to be meaningful affairs.”

For me Calladine comes crashing off the rails when he starts to reveal what lies behind his rejection of soccer and his genuflection to football: in a word, brutality. Football, he says, “is, by its very nature, violent. Wonderfully so, in fact.” There’s simply not enough violence in soccer for Calladine’s liking.

I cannot see that he helps his argument by telling us about a minor-league player (in England -- nearly all of Calladine’s tales of woe take place in English soccer) who suffered a broken tibia, was out for a year and then, on his return, broke the same leg with a sickening crack, clearly audible to the spectators.

Are we really expected to find that gruesome tale uplifting? Seems so. Because soccer is “No longer a game with a physical edge ... and it’s the poorer for it.”  The NFL is preferable, even though Calladine admits that its wanton violence must mean “often horrendous” injuries, “But, god, is it magnificent.”

You will doubtless have your own opinion about the beauty of violence.

Calladine is on much firmer ground when he details the terrific job that the NFL does in making sure that football does not get out of balance -- i.e. in maintaining a balance between offense and defense.

For me, that is the key word: balance. A word that, as far as I’m aware, is unknown to the soccer biggies. Soccer at the moment is seriously unbalanced, has been for decades, in favor of defense. Football -- and basketball and baseball -- have in the past made small rule changes to restore the balance. Soccer does not do that.

Anyway, who are the soccer biggies who would make the decisions? I have no idea. But in the NFL you do know. The owners. And Calladine has a lot of incisive stuff to say about the NFL owners. For a start, how long-lived they are when compared to the increasingly fly-by-night soccer owners.

According to Calladine, every English Premier League team has changed ownership at least once in the past 20 years. Whereas in the NFL, “the average team has been owned for more than 34 years by the same person or family.” A sort of family continuity that has led to the growth of a “culture of custodianship,” within which this large group of powerful and frequently fractious businessmen manage to work together and really do have the “good of the game” in their sights. “Unlikely as it seems,” says Calladine, this “self-selecting group of rich, largely white, largely older men, seem to have managed to look after a sport better than a much more democratic, open system.”

Calladine plows on with the wonders of the NFL -- with the things soccer should think about copying: TV revenue sharing, TV blackouts, salary cap, rookie contracts, and of course, the player draft.

I suppose that’s true. But it’s difficult to place much trust in Calladine’s praise of the draft because he seems to have very little understanding of the role of college football. The college game gets only five mentions (all of them en passant in 180 pages. That Calladine really has no understanding of the exploitation of college players, and the unholy alliance between professional NFL football and college amateurism, is made starkly clear with his assertion that an NFL team “must find and develop its own players.”

Way off, I’m afraid. OK, so Calladine’s case for NFL perfection is itself far from perfect. But his indictment of soccer contains a lot of difficult truths. While I do not agree that soccer has “lost its magic,” I’m pretty sure that it will do so if it doesn’t start correcting its own imperfections.

Were there such a category in literature (maybe there is?) as “Rants,” that’s the shelf where “The Ugly Game” should sit. That is not meant to belittle it. Like all good rants, it’s full of energy, of good ideas and awful ideas, of common sense and utter nonsense. And of course, tremendous enthusiasm. That is contagious, and that is what makes Calladine’s book so enjoyable.

“The Ugly Game -- How football lost its magic and what it could learn from the NFL” By Martin Calladine. (Pitch Publishing, Durrington England)

england
19 comments about "Where soccer fails, the NFL gets it right".
Read more comments >
Next story loading