By the time Christian Pulisic played for the USA at the 2015 U-17 World Cup, he had already left the Bradenton Residency to join Borussia Dortmund's youth program. Luca de la Torre had joined Fulham instead of going to residency. And a few other players had also left for Mexican and European clubs.

The current U.S. U-17 is also likely to include several non-residency players in its squad for qualifying play in April, and the World Cup in October in India if the USA qualifies.

When John Hackworth named the 32-player residency roster for the spring semester, it came with four changes. Two of the departures were prompted by pro contracts. Midfielders Chris Goslin and Chris Durkin leave residency after signing MLS Homegrown contracts with Atlanta United and D.C. United.

“Those two players are no longer in Residency because they are trying to make their first teams in preseason,” Hackworth said. “They play in MLS clubs, they're pros and they've made that next step in their career. We'll bring them back in with us for certain events and obviously try to include them in our qualifying roster, but right now, they are onto bigger and better things.”

Durkin started all three games at December’s Nike International Friendlies at which the USA beat Brazil (3-0), Turkey (5-1) and Portugal (7-1). The Virginia product, who has shared captain duties with Josh Sargent, explored options in Europe before becoming the first Homegrown signing in two and a half years for D.C. United, for whose academy who played five years Durkin signed the Homegrown contract last June and played for D.C. United in an Open Cup game in July and played three USL games with D.C. United affiliate Richmond Kickers.

Goslin signed a pro contract with Atlanta United in October. He and fellow U.S. U-17 Andrew Carleton were teammates on the U-16 Georgia United team that in the 2014-15 season was the only non-MLS club to reach the U.S. Soccer Development semifinals. Carleton, who scored twice against Turkey and Portugal at the Nike Friendlies, left Residency in the fall after signing with Atlanta United in May. He played three games for Atlanta United USL affiliate Charleston Battery. 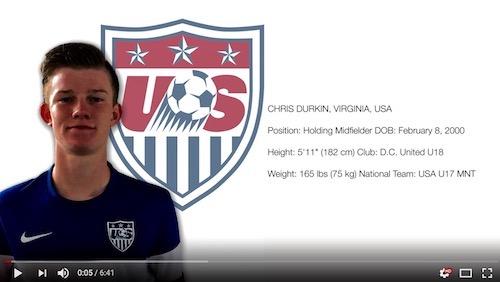 When U.S. Soccer launched the latest cycle, it agreed that some players would be well off if they stayed with the MLS academy teams, such as the LA Galaxy’s Jake Arteaga and Kelee Cornfield-Saunders and the Philadelphia Union’s Rayshaun McGann. Forward Timothy Weah, who scored in the USA’s 3-0 win over Brazil and its 5-1 win over Turkey in December’s Nike International Friendlies, plays for Paris St. Germain.

“These were strategic additions based on what we felt we needed on the depth chart at each position,” Coach John Hackworth said. “They’ve earned that invite through their performances in the Development Academy and their opportunities with us last fall. We’re excited to have them and see if they can push for a spot on that qualifying roster.”

The Concacaf U-17 Championship that determines qualifiers for the 2017 U-17 World Cup takes place in Panama April 14-May 8 in Panama.

NPR: With Concussion Risk In Soccer, Headers May Kick It Up A Notch

A study published this week by the journal Neurology showed that players who headed an average of 125 balls over a 14-day period were three times more vulnerable to concussion than those who headed less than four times. The study aimed to “determine the rate and differential contribution of heading vs unintentional head impacts (e.g., head to head, goal post).”

Lead author on the study, Michael Lipton, a professor of radiology and psychiatry/behavioral sciences at Albert Einstein College of Medicine in New York, said that the smaller, more frequent impacts like those from heading a soccer ball often sneak under the radar compared to violent collisions, but they could still pose significant threats to brain health. "Over a quarter of a billion people play soccer all across the world," he said. "So it's key to understand the long-term effects of headers, a skill unique to the sport."

“A battle is quietly unfolding under the surface in the highest echelons of youth soccer in the United States,” writes Charles Boehm in his report on the strife between the ECNL and the U.S. Soccer Federation, whose Girls Development Academy launches in eight months. “Two rival leagues, one established and the other a brash new startup, find themselves faced off in a battle of hearts and minds — and therefore wallets.”