Teams have been added to each of the five age groups while a single-age U-15 division has been added for the 2017-18 season. 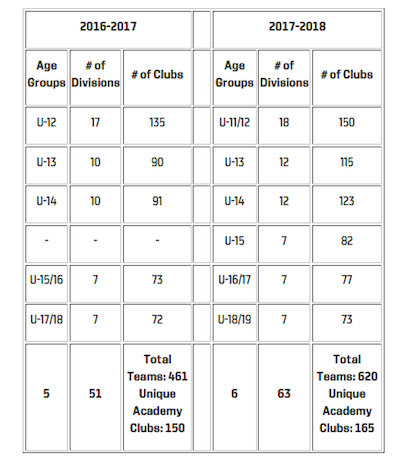 “The No. 1 objective of this camp is to get international experience,” Tsakiris said. “That’s the main objective. Then of course, we are also there to continue to evaluate and monitor the progress of players on our depth chart.”

“Anytime you go down to South America, it’s always going to be different than the competition we get in Europe, especially the style of play,” Tsakiris continued. “I think this is a little more along the lines of what our players will face in Concacaf and I think that the style matches that and prepares our players a little bit better. So, anytime we can go to Argentina or Chile or Brazil or any of these top countries, I think it’s a great challenge for our players and ultimately, we want to prepare our players by giving them international experience.”

The friendlies will mark the competitive games for the U-16s since December’s IMG Cup in Bradenton Fla., where the team played a year up and swept its three group games, outscoring its opponents 17-0.

The U.S. U-19 national team is holding a 22-player camp in Sunrise, Florida. The first camp of 2017 for Coach Brad Friedel’s squad will include friendlies against El Salvador and Miami FC.

“I'm really looking forward to the camp and I think we've assembled a good, athletic squad and I will be really interested to see who does well,” Friedel said. “This camp is meant to bring in new and returning players and give them the opportunity to get into the system and have a chance at making a future U-20 roster.

"The second part of that is, the (birth year) 1997, 1998 and some 1999 age groups are going to make up the bulk of the next U-23 Olympic team. So it’s really important that we continue to give the players international experience.”

Of the 22 players, seven are collegians, 11 play for Development Academy teams, two compete in the USL, one plays abroad (Daniel Barbir) and one plays at a domestic non-Academy club.

• 1999-born Milan Iloski is the youngest player on the roster.

U.S. Soccer Women’s Development Coach Mark Carr  has called up 40 players for a Feb. 11-18 training camp at the U.S. Soccer National Training Center in Carson, California, that marks the start of the two-year cycle for the age group as U-15s before transitioning to U-17s in 2019.