Detroit's bid for an MLS expansion team is based on its backers building a downtown soccer stadium as part of an entertainment district.

Rock Ventures, the Cleveland Cavaliers owner Dan Gilbert's development form, has formally submitted an offer to buy the site on which an unfinished jail is located, build the jail about 1.5 miles away and then use the site for its $1 billion development. 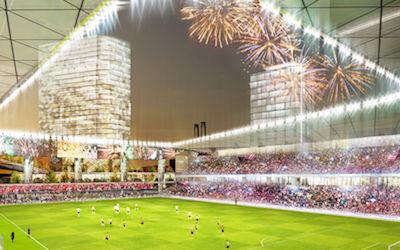 Rock Ventures proposes to build new adult and juvenile detention facilities, a new criminal courthouse and sheriff's and prosecutor's offices -- estimated to cost $420 million -- for the cost of finishing the former facility and upgrading the current hall of justice, $300 million.

In return, Rock Ventures would get the old jail site on Gratiot Avenue, near Greektown and Ford Field, and credit for the savings to Wayne County for having the detention facilities and criminal courthouse side by side.

Besides the 23,000-seat soccer stadium, the downtown site would include office, commercial, hotel and residential space and parking.

The MLS bid was submitted by Detroit Pistons owner Tom Gores and Gilbert.