Oxlade-Chamberlain’s development became an example of the importance of considering a player’s rate of physical development instead of simply evaluating his talent against other players of the same age.

“At under-14 he was very immature in regards to his physical ability,” says Bunce in a USSoccer.com interview upon his hiring as U.S. Soccer’s High Performance Director. “He was not going through puberty like a lot of his other counterparts. He was fragile and underdeveloped. In many organizations, he might’ve been released, but we rated him as a technician and as a person and we put a lot of time and effort into him.”

Instead of moving him through the academy system, Southampton kept him back a year.

“We created a specific program to develop him physically on a different trajectory from the other players and allowed him to play amongst people that he could match up with and not just get pushed off the ball, bullied, or not be allowed to use his skills and abilities,” says Bunce. “Looking back, Alex talks about that timing being really important to him in regards to being able to perform and being able to develop on his own trajectory.

“In many cases within England, players are being released for being too small. … We took a massive stance on this, giving the players the right opportunity and the right environment to thrive no matter what their birthdate was, but rather what their individual requirements were.”

Oxlade-Chamberlain made his professional debut before his 17th birthday. Theo Walcott, now also with Arsenal, joined Southampton at age 11 and he also made his pro debut at age 16. 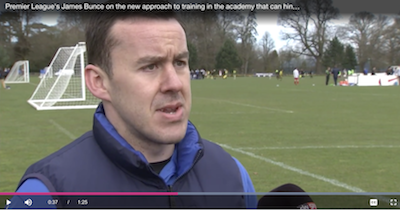 After eight years with Southampton, Bunce spent three years with the English Premier League, first as Head of Sports Science and most recently as Head of Performance. In that capacity he implemented “bio-banding” for players ages 12 to 15 to address the bias by clubs for selecting players born early in an age group cycle because they tended be bigger. Bio-banding groups players in competition based on their level of maturation, based on a child’s height, weight and the height of both parents. Players of different sizes still compete against each other, but bio-banding reduces “violent swings of maturity difference within the chronological system,” says Bunce.

While Bunce worked at the EPL, it created an Injury Surveillance-Based project that tracked injuries for all players from U-9 to the first team and a National Profiling project for every player from under-12 to under-23

He’ll be working with all U.S. national teams and the U.S. Soccer Development Academy.

“If anyone is judging a player at under-17 or under-18 purely based on their ability to score goals or their ability to dominate in a training session, there is a massive amount of evidence now that shows that you could be misidentifying them,” Bunce says. “The way we coin the phrase here is that you start seeing fool’s gold and missing the diamond in the rough. You can’t start backing the player who isn’t actually your best option only because he’s just doing well in that age group. You want to be identifying the longer-term strategy, seeing what they could offer in their 20s."

Brazil fails to qualify for U-20 World Cup

Brazil, winner of five U-20 World Cups, second only to Argentina’s six titles, failed to qualify for the 2017 U-20 World Cup. Uruguay, Ecuador, Venezuela and Argentina earned South America’s berths for the South Korea-hosted U-20 World Cup that kicks off in May. Brazil, which finished runner-up to Serbia at the 2015 U-20 World Cup, finished fifth in South American qualifying by tying an already eliminated Colombia, 0-0, on Saturday.

The USA begins its qualifying campaign Saturday at the Concacaf U-20 Championship in Costa Rica from which four of the region's team will earn berths at the World Cup.

The U.S. U-18 women’s national team, coached by U.S. Soccer technical director April Heinrichs, will travel to England with a 20-player squad for a Feb. 15-26 training camp that will include two games against England and one against Norway.

The team of players born in 2000 will train at St. George’s Park, England’s National Training Center and play England on Feb. 19 and Feb. 25 and Norway Feb. 21.