Clint Dempsey  returned to practice in January after being sidelined for five months. Now,  he says he ready to play with the Seattle Sounders when the MLS season opens the first weekend of March. 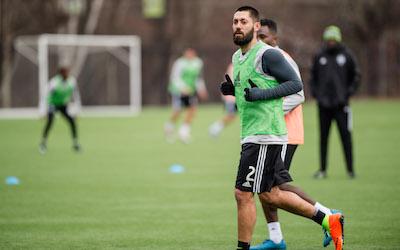 Dempsey spoke with reporters for the first time but would not go into specifics of the heart condition that forced him to the sidelines in late August, but he did say he first noticed the symptoms a year ago during training camp.

"It's something that's difficult to kind of explain,'' Dempsey said after Sounders' training on Tuesday. "But at the same time I'm not feeling those things anymore and I'm happy to be back playing.''

Dempsey played his first competitive match as the Sounders wrapped up the first part of preseason with a 1-1 draw against the Portland Timbers in Tucson, Arizona. He says he's at 85-90 percent full fitness.

"I was able to consistently progress and work on my fitness and make sure everything was moving in the right direction,'' he said. "It started off slow and had to work my way up and still working up now but feeling like I'm finally getting close.''

The Sounders finish preseason with a 11-day stay in Charleston, South Carolina, where they play the USL Battery, Atlanta United FC and the Columbus Crew. They open the 2017 season March 4 at Houston.

New U.S. national team coach Bruce Arena has already said he won't call up Dempsey for the World Cup 2018 qualifiers against Honduras and Panama in late March to allow him to get match fitness.

"It would be great to get back in with the U.S. team," Dempsey said, "but to do that I have to do well here and that's the main focus, is here with Seattle and making an impact on the field here."