Carli Lloyd, the 2015 and 2016 FIFA Women's Player of the Year, became the latest U.S. national team player to head to Europe when she signed a contract with Manchester City through the FA Women’s Super League Spring Series and UEFA Women's Champions League in June.

The move represents the latest excursion of an American star outside her comfort zone into Europe, where the number of clubs with the ambitions to rival NWSL clubs is growing but still finite.

Like Morgan, who plays in the NWSL for the Orlando Pride, Lloyd will return to the the NWSL, where she plays for Houston Dynamo, when the U.S. summer transfer window for women reopens. 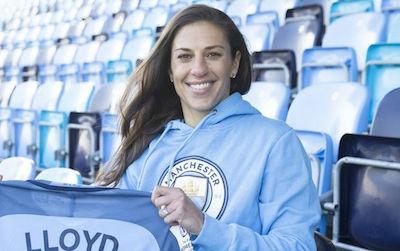 “I’m always looking for different challenges," Lloyd told CityTV. "I always want to continue to get better and look for ways where I am going to be able to push my game. Coming here and being part of City is going to do that. It’s definitely an unbelievable opportunity to be able to compete in the Spring Series, the FA Cup and most importantly, the Champions League."

“This isn’t a World Cup or Olympic year so this is the year to test the waters," Lloyd added. "I want to make a huge wave. I know the Champions League is big and I hope to be playing in a Champions League final. That’s first and foremost; then of course, winning the Spring Series as well and the FA Cup. If I can accomplish that and help this team push on, it will be another thing crossed off my bucket list."

The 10-team Women's Super League is switching to a fall-spring season so it must play a shortened spring season that begins in April and ends  June 3. Manchester City is also competing domestically in the FA Cup, where it is also the defending champion.

It is competing in the UEFA Champions League for the first time. It beat Zvezda Perm and Brondby to set up a quarterfinal series with Denmark's Fortuna Hjorring in late March.