D.C. United will hold a groundbreaking ceremony for 20,000-seat Audi Field on Feb. 27 after it received final approval on Thursday for the $300 million project at Buzzard Point in Southwest Washington. The final hurdle was cleared when the project received unanimous approval from the D.C. zoning commission. 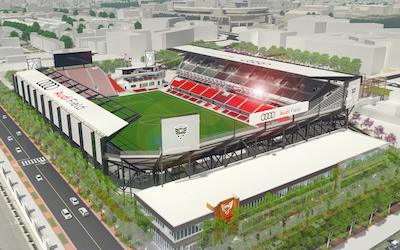 “We are extremely excited to break ground on this site, a project that has been 21 years in the making," Levien said in a team statement. "Since Erick [Thohir] and I assumed stewardship in 2012 we’ve been on a mission to deliver to our fans and this community a new, permanent home. We appreciate all of the hard work that has gone into preparing for this moment and can’t wait to finally put shovels in the ground at the site of our new home, Audi Field.”

The facility will feature 31 luxury suites, a bike valet, and 500,000 total square feet of mixed-use retail and residential space on site. Audi -- an MLS sponsor -- was announced as the naming partner of the stadium on Wednesday.