In what bills itself as “America’s Finest City,” backers of an MLS expansion franchise plan to build “Soccer City.”

Included in the project next door to Qualcomm Stadium, home of the departing San Diego Chargers, is an expandable, 30,000-capacity stadium to be used for MLS matches and San Diego State football games. The group behind the project, FS Investors, unveiled plans Monday that include housing, offices, hotels, an entertainment district and park space. 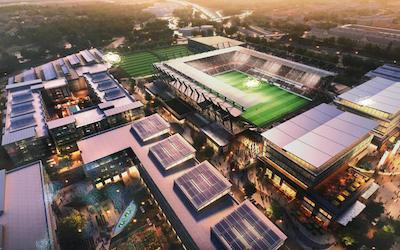 The estimated cost of the project is more than $1 billion, of which $200 million would be paid for the stadium at no cost to taxpayers. FS Investors is proposing it split the stadium costs with San Diego State, which has not committed to the project but will need a home for its football team once demolition starts on Qualcomm. Under its expired lease the school received no revenues from concessions, parking, or in-stadium advertising at Qualcomm, and it favors a facility with a capacity of 40,000.

Another wrinkle to the plan is that on the 80-acre site, 16 acres would be set aside for a larger stadium to house an NFL team should one land in San Diego. The Chargers, one of the original American Football League teams borne in 1960, moved to San Diego after one season and had played in the city for 56 years prior to the announcement last month by team owner Dean Spanos that the team is moving back to Los Angeles.

The Chargers will play the next two NFL seasons at StubHub Center and move into a new stadium to be shared by the Rams in Inglewood starting in 2019. Owned by Colorado Rapids and Arsenal owner Stan Kroenke, the Rams have not announced where they will play the next two seasons but are negotiating terms with the Los Angeles Coliseum.

Spanos confirmed his plans to move the Chargers after voters rejected a ballot measure (57 percent to 43 percent) in November. It would have provided revenues for a stadium development project by increasing hotel-use taxes from 12.5 percent to 16.5 percent, and was vehemently opposed by the tourism industry and many politicians.

FS Investors hopes to bypass a special election by gathering 120,000 signatures to be presented as part of a proposal submitted to the City Council for approval. It would require five 'yes' votes to pass. The city charter allows the City Council to green-light such projects if they do not implement new taxes or affect existing tax rates.