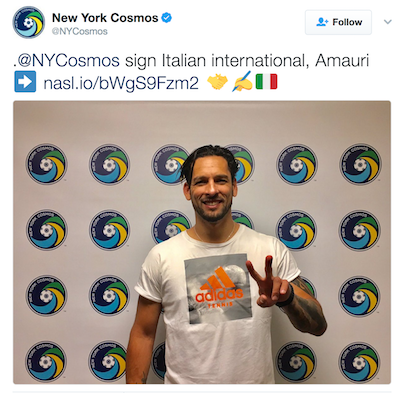 Amauri, who moved from Brazil to Italy at age 20, played once for the Italian national team after naturalizing. He scored 83 goals in 333 Serie A games before joining Ft. Lauderdale. During his prime he commanded a transfer fee of more than $20 million in a move from Palermo to Juventus in 2008.

“Amauri has had an extended career in European soccer and his experience will definitely be an asset to the club,” said Cosmos coach Giovanni Savarese. “He is a difficult forward to play against because of his size [6-foot-1], speed and technique.”