Tab Ramos' quest to become the first coach to qualify the USA for three straight U-20 World Cups comes down to games against Mexico on Monday and El Salvador on Friday at the Concacaf U-20 Championship in Costa Rica.

After opening with a 1-0 loss to Panama, which went on to win Group B, the USA beat both Haiti and St. Kitts & Nevis by scores of 4-1. Of course, Mexico, winner of the last three Concacaf titles, will pose much tougher competition than the Caribbean foes. 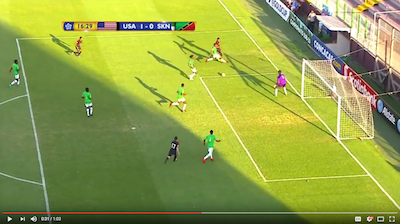 "Going into the second round, we’ve created tons of opportunities to score," said Ramos, whose team outshot St. Kitts 33-2. "We have to be a little more clinical in front of the goal. This is normal. I think the team gets better as the tournament goes on. I’m sure Mexico is going to be very good. I think all the opponents in the second round are very good, so we just have to prepare.

The top two finishers of the USA-Mexico-El Salvador group will qualify for the 2017 U-20 World Cup. Mexico won Group A with wins over Antigua & Barbuda (3-0), Canada (5-0) and Honduras (1-0). El Salvador clinched Group C first place with a 1-0 upset of host Costa Rica and a 3-1 win over Bermuda.

Sebastian Saucedo struck twice in the win over St. Kitts & Nevis after Brooks Lennon, who scored a hat trick in the USA’s 4-1 win over Haiti, opened the scoring in the 16th minute and Jonathan Lewis made it 2-0 in the 20th minute. Saucedo scored with a 25-yard shot and a 27-yard free kick.

In 2013, U.S. Soccer made the U-17 and U-20 women's national team jobs full-time positions. But neither B.J. Snow nor Michelle French  improved on the results of their predecessors and on Friday, U.S. Soccer announced that both be replaced. However, both will continue working for U.S. Soccer.

Snow and French lead their respective teams through two cycles. Snow’s first team failed to qualify for the 2014 U-17 World Cup and his second team exited in the first round of the 2016 U-17 World Cup, at which it opened with a 6-1 win over Paraguay before losses to Ghana (2-1) and Japan (3-2).

French’s teams exited the 2014 U-20 World Cup with a quarterfinal shootout loss to North Korea and finished fourth at 2016 U-20 World Cup, at which the USA won two games of its six games and was outshot by five of its six opponents.

U.S. Soccer has begun the hiring process to replace Snow and French, both of whom have been reassigned.

French, who had served as an assistant to Jill Ellis at the 2015 Women’s World Cup and 2016 Olympics, will now be a full-time national team assistant coach.

“Michelle was a huge asset for players and staff over the past two years, and now to have her solely focused on our team will be a tremendous benefit from a soccer standpoint,” Ellis said. “She brings a former national team players’ perspective, the experience of three World Cups, and contributes greatly to the positive synergy in our environment.”

Snow has been named head of U.S. Women’s National Team Talent Identification, a new federation position in which he will identify and track potential national team players in the NWSL, college ball, the U.S. youth national teams and overseas.

“B.J. is a great fit for this new position,” Ellis said. “It was a role I felt we needed to fill a gap in the evaluation of college-aged players. Ultimately, B.J.’s task is to find players who have the profile to become full women’s national team players. This position is particularly valuable right now with where we are in our cycle and our goal of continuing to deepen our pool.”

Snow is also serving as interim U.S. U-23 head coach until the position is filled. He will be coaching the U.S. U-23s at the La Manga tournament in Spain in March.

The team of players born in 1998 or later will be coached by U.S. Women’s Technical Director April Heinrichs. She will be assisted Michelle French, the end of whose tenure as U-20 head coach was announced by U.S. Soccer on Feb. 24.

The 24-player squad for the Spain trip is comprised of 14 players born in 1998, the cutoff of year for the 2018 U-20 World Cup, nine players born in 1999 and one in 2000. Six of the 1999s played for the USA at the 2016 U-17 World Cup: goalkeeper Laurel Ivory, defenders Isabel Rodriguez and Karina Rodriguez, midfielders Jaelin Howell and Frankie Tagliaferri and forward Civana Kuhlmann.

The roster includes two players who were on the USA’s 2016 U-20 World Cup team: reserve goalkeeper goalkeeper Brooke Heinsohn and midfielder Emily Fox. Ten of the players are collegians. 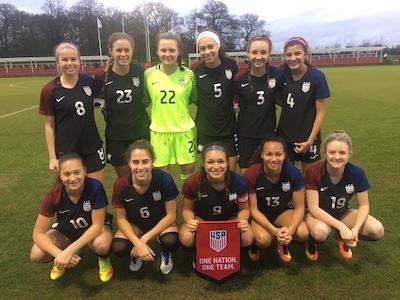 The Real Colorado striker (No. 9) also assisted on Cori Dyke’s goal. Summer Yates, who also scored against England, opened the scoring against Norway with a diving header as Coach April Heinrichs’ team outshot the Norwegians, 13-9. The team will cap its 10-day training camp with a Feb. 25 rematch with England.

The U.S. U-23 women’s national team will play Japan (March 2), England (March 4) and Norway (March 7) during a Feb. 25-March 7 trip to La Manga, Spain. The team, a 22-player squad that includes 16 NWSL players, will be coached by Seattle Reign head coach Laura Harvey.

The roster includes four collegians and high school senior Ashley Sanchez, who scored at both the U-17 and U-20 World Cups last year. B.J. Snow, recently relieved of his duties as U-17 girls national team coach, will assist Harvey and then serve as acting U-23 head coach during U.S. Soccer hiring process for a new head coach of the U-23s, who have been coached in the past two years by University of Illinois coach Janet Rayfield.