Tab Ramos on U-20 win: 'We gave them very little if anything at all'

Mexico entered the qualifying tournament for the 2017 U-20 World Cup having won the last three Concacaf U-20 Championship titles, in 2011, 2013 and 2015, and hadn’t lost a game in the competition since 2009. The last time the USA had beaten Mexico in a competitive U-20 game was in 1986, when the Americans qualified for the 1987 U-20 World Cup, where its squad included Tony Meola, Marcelo Balboa and Jeff Agoos.

On Monday, the USA beat Mexico, 1-0, in the first of its two second-round games at the Concacaf U-20 Championship, which means a U.S. tie or win against El Salvador on Friday will clinch a World Cup berth for the USA. (The USA would also qualify with a loss on Friday if El Salvador beats or ties Mexico on Wednesday.)

The win by Coach Tab Ramos' team, on a 29th minute goal by captain Erik-Palmer Brown, ended the USA's eight-game losing streak against El Tri's U-20s, which had gone 20 games without a loss in Concacaf Championship play. 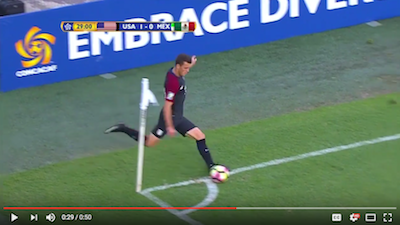 Palmer-Brown scored with a 6-yard header from Brooks Lennon’s corner kick. Besides Palmer-Brown’s strike, neither team created solid scoring chances in the first half, but for most of the first 45 minutes the Americans succeeded in pinning the Mexicans in their own half. It was much the same in the second half as Palmer-Brown led a U.S. midfield that prevented the Mexicans from finding their rhythm.

"It felt great but I think what felt the best was the fact our team gave everything it had and didn’t really give options to Mexico to win the game," said U.S. coach Tab Ramos. "We know Mexico is always a high-scoring team. We know they always create a lot of chances. And we gave them very little if anything at all today. The team made an incredible effort and we got the result."

Shortly after the second-half kickoff, central defender Tommy Redding slid to clear a threatening low ball near goal area to deny Ronaldo Cisneros a shot — but it wasn’t a sign of a more lethal Mexican attack. Cisneros, who entered the game with a tournament-leading five goals, saw little of the ball and it wasn’t until the final minutes that the Mexicans, who finished the game without a shot on frame, had any sustained possession in the U.S. half. But even late in the game, it was the USA that came closest to scoring as Mexican keeper Jose Hernandez denied Coy Craft and Jonathan Lewis on breakaways.

"I think what was important for us is that tactically we wanted to push them from the start of the play," Ramos said. "We didn’t want them to feel comfortable at all in the game and I think the boys did a great job. It requires a big effort in order to not allow a team to play. And we did that today."

The U.S. U-17 boys national team is in Honduras for a training camp preparing for the U-17 World Cup qualifying tournament hosted by Panama (April 21–May 7). Coach John Hackworth  took a 26-player squad to San Pedro Sula. The USA played Honduras in a friendly Monday and will have a rematch with the Catrachos Thursday.

The U.S. U-18 women’s national team tied 0-0 with England to finish off its 10-day training camp in England that included a 3-1 win over the host six days earlier and a 5-0 win over Norway. The April Heinrichs-coached U.S. team U-18s once again outshot England, but goalkeeper Hannah Hampton posted seven saves and shut out Sophia Smith and Summer Yates, who had scored five and two goals, respectively, in the previous two games. 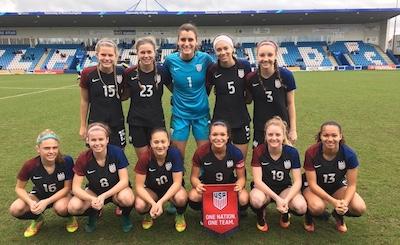