Many thought it would never happen. Thirteen years after D.C. United first sought to find a new home for run-down RFK Stadium, its home since MLS's launch in 1996, it broke ground on Monday at Buzzard Point in Southwest Washington on a new soccer stadium -- 20,000-seat Audi Field. United hopes to open the $300 million stadium in June 2018. 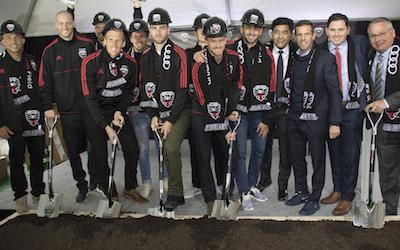 “I wanted to make sure D.C. United were here to stay," said D.C. mayor Muriel Bowser, "and that they were going to continue to invest in Washington, D.C., and the best fans in the world. World-class cities have world-class sports teams and facilities.”

A proposal in Poplar Point collapsed in 2008 and an initiative in Maryland's Prince Georges County failed in early 2009. But as the economic environment improved for the city so did support for getting a stadium deal done.

New United owners helped also, and managing general partner Jason Levien, a former sports agent, with connections in Washington, where he worked as an attorney, worked behind the scenes to gather support for the Buzzard Point project. United will cover the $150 million estimated to build Audi Field. D.C. will pay the rest to cover the cost of buying the land and get the surrounding infrastructure in order.

Of those involved in the ceremonies, none goes back as far with United as its head coach, Ben Olsen, who joined the team in 1999.

“I’ve been lucky enough to be involved with this club as a player and coach for nearly two decades," he said, "so as you can imagine, it’s a very special day for me, as it is for many of you. To me, today is also about all the players who have worn the jersey throughout the years, and the staff that have worked tirelessly to build this club.”