Can Bobby Wood save Hamburg SV?

If U.S. striker Bobby Wood gets on a scoring roll, the 24-year-old Hawaii product will become a hero in Hamburg, Germany’s second largest city. Because Hamburg SV, the only team that has played in the Bundesliga every season since the league’s inception in 1963, needs his goals badly.

Franz Beckenbauer, though much more famous for his titles with Bayern Munich, was part of HSV’s 1983 title-winning team after his four-year-stint with the New York Cosmos.

By far the most famous HSV man is Uwe Seeler, perhaps still the most beloved German player by those old enough to remember him – and much respected by those who have heard of him.

In the definitive book about German soccer history, “Tor,” Uli Hesse writes about a master baker by the name of Siegfried Klinsmann: “Although he was living in Swabia now, he had grown up north of Berlin, which is why he was a fervent Hertha supporter. Yet he idolized Seeler and once his sons would be old enough to listen, he’d told them again and again what a great player this man was.”

The stocky 5-foot-6 Seeler, who played in four World Cups for West Germany, was nicknamed “Der Dicke” (fatty) -- but was also affectionately known as “Uns Uwe” (Our Uwe). He spent his entire career with HSV -- scoring 404 goals in 476 games in 1953-1972 -- and famously stayed faithful to his club while turning down a major money offer from Inter Milan.

If you meet a German named Uwe, he was probably named after Seeler.

But because the days of Uns Uwe and contending for championships are so long ago, the club and its fans have prided themselves on its history of survival. There’s even a digital clock in the Volksparkstadion that ticks off how many years (53), days, minutes and seconds HSV has been in the Bundesliga.

FC Cologne’s 1998 relegation left Hamburg SV as the only founding member of the Bundesliga, which consolidated Germany’s regional leagues in 1963, never to be relegated. (Record champion Bayern Munich didn’t win promotion to the Bundesliga until its second season, in 1965.)

Last season, HSV finished 10th, but in the two previous seasons it finished third to last, forcing a playoff series against the second division’s third-place team. Both times HSV prevailed -- in nail-biting fashion. It fended of Greuther Fuerth on away-goals in 2014. In 2015, it was on the brink of disaster when Marcelo Diaz scored a last-minute free kick to send its game against Karlsruhe into overtime, in which Nicolai Mueller sealed the victory.

HSV started poorly this season, going winless in its first 12 games. But it surged in early February, pulling off three straight wins and a tie to move out of the relegation zone. But last weekend, with Wood on the bench nursing a thigh injury, Bayern Munich humiliated HSV with a 8-0 thumping that dropped HSV into 17th place -- third from last.

“You don’t want to be a guy on the team that gets relegated after all these years,” Wood told the New York Times’ Andrew Keh. “Just because we never got relegated doesn’t mean it’s not going to happen, so you can’t think it’s not going to happen. If we continue this way, we will get relegated. We have to get out of that mentality, start realizing we’re in a bad situation, and do something different to get out of it.”

HSV has conceded a league-high 45 goals. Only 17th-place Inglostadt and 18th place Darmstadt have scored fewer than HSV’s 21 goals.

Wood, who arrived from second division Union Berlin on a transfer fee of $4.4 million last summer, is tied as HSV’s leading scorer on four goals with midfielders Michael Gregoritsh and Mueller. Wood scored in his first two games for HSV, opening his account with the season-opening win over Inglostadt.

Wood, who is featured on HSV’s Twitter home page, had a rocky patch that included a red card in an October loss to Cologne, but earlier this month scored twice in a 2-0 German Cup win over Cologne that sent HSV into the quarterfinals. 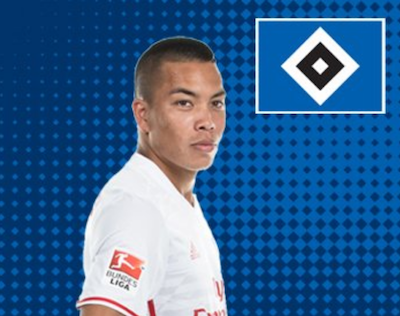 On Wednesday, HSV lost 2-1 Borussia Moenchengladbach in the German Cup quarterfinals as Wood his fourth German Cup goal and eighth in all competitions.

That will be the first of the final 12 games of the Bundesliga season. Plenty of time for the American striker to help keep the HSV clock going.