The Seattle Sounders won their first MLS championship with a furious second-half run and a sweep of Sporting KC, FC Dallas, Colorado and Toronto FC in the playoffs. But management wasn't content to rest on its laurels and unloaded 16 players, including three MLS Cup starters. The Sounders will be much younger in 2017, a necessary move they believe if they are to continue to contend. 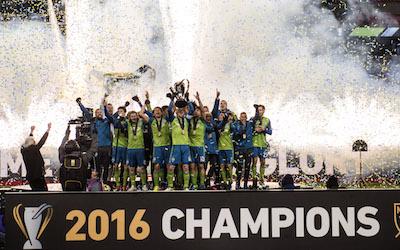 Yes, the Sounders will be younger, but they still have regulars who are 30 or older, mostly notably, Clint Dempsey, who is 33 and recovering from a heart ailment that sidelined him for the last two months of the regular season and playoffs. He's been given the green light to play again, though how much time he'll see in the first month remains to be determined.

Another veteran, 31-year-old Brad Evans, has started multiple positions for the Sounders and was projected to start at right back in place of departed Tyrone Mears, but he didn't play in preseason after returning from national team duty in early February. His fill-in will be Gustav Svensson, the Sounders' only offseason import.

Svensson arrived from China's Guangzhou R&F with the intention of playing in midfield, but he's played on the backline before -- he was a center back in China -- and says he's happy to play anywhere. That versatility is what head coach Brian Schmetzer wants as the Sounders begin the season with a smaller roster.

The other signings include Americans Harry Shipp and Will Bruin, both looking for a change, and a pair of Homegrown signings out of out of the Pac-12, Henry Wingo (Washington) and Seyi Adekoya (UCLA). All four should get playing time early in the season. Bruin could even start Saturday at his former club, Houston, if Jordan Morris (ankle injury) isn't ready to go.

The Sounders' chances of repeating, though, will depend on getting another great season out of Uruguayan midfielder Nicolas Lodeiro, who was instrumental in turning around the Sounders in the last three months of the regular season and over the top in the playoffs.

"He gave belief in the group," said Schmetzer, who took over for Sigi Schmid a day before Lodeiro signed. "I think the underlying tone of belief was always there we just needed that spark and I think he gets a lot of credit that for that."

Lodeiro, arguably the best mid-season addition in MLS history, was surprised how quickly he adapted.

"It surpassed the expectations I had," he said. "I wanted to come here, help the Sounders get to the playoffs. It kept growing and growing."

In the offseason, Lodeiro spent six weeks back home in Uruguay for his first extended break in two years and married to his longtime girlfriend, Micaela, with whom he has a young son, Leandro. He says he needed the break.

“Truthfully, I was tired by the end," he said. "It was a long season for me. I was able to rest a lot and come back with a lot of energy to do good things again.”