The U.S. U-20 national team faces Honduras in the Concacaf U-20 Championship final on Sunday, but the main goal has already been achieved. Coach Tab Ramos' team qualified for the 2017 U-20 World Cup by beating El Salvador, 2-1, on Friday.

Coming off a 1-0 win over Mexico on Monday, the USA was assured of qualifying unless it lost by three goals or more to El Salvador, which got routed, 6-1, by Mexico on Wednesday. Mexico, Honduras and Costa Rica also advanced to the World Cup. But the USA and Honduras meet in the final, giving the USA a chance to win its first ever outright U-20 Concacaf Championship.

"It feels good to qualify," said U.S. captain Eric Palmer-Brown. "We battled for a year and a half to get to this point and we’re not done yet. We have to continue to fight. We have one more game."

Emmanuel Sabbi, making his first start at the Costa Rica-hosted qualifying tournament, opened the scoring for the USA in the 18th minute with a 12-yard shot after receiving a pass from Eryk Williamson. Luca de la Torre, after receiving the ball from Palmer-Brown in the center circle, evaded one Salvadoran with a back-heel turn and, as three more Salvadorans converged on him, passed to Williamson.

Williamson made it 2-0 in the 25th minute with a searing 23-yard half-volley that flew into the net off the inside of the far post.

The Salvadorans pulled within one when a low shot from Marvin Marquez bounced through diving goalkeeper Jonathan Klinsmann’s hands. 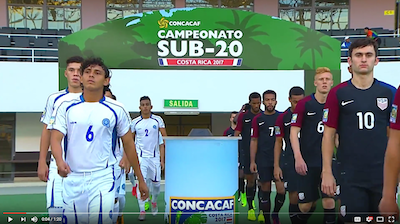 The second half degenerated into a foul fest. El Salvador’s Kevin Reyes was red-carded in the 80th minute and his teammate Marcos Rodriguez was ejected along with the USA’s Sebastian Saucedo in the 90th minute.

• The USA has now qualified for 18 of the 21 U-20 World Cups since the biennial tournament’s inception in 1977.
• The last time it failed to qualify was for 2011 World Cup.
• Tab Ramos is now the first coach to lead the USA to three straight U-20 World Cup berths. In 2015, the USA reached the quarterfinals, falling in a penalty-kick shootout to eventual champion Serbia.
• A win on Sunday against Honduras would give the USA its first Concacaf U-20 Championship title.
• The 2017 U-20 World Cup in South Korea takes place May 20-June 11. The draw will be held March 15.

Revs suspend academy player for going on trial in Europe

TopDrawerSoccer.com’s Will Parchman reports that the New England Revolution has suspended 17-year-old academy forward Justin Rennicks for his final 2017 spring semester of Development Academy play for going on a training stint at a Bundesliga club Eintracht Frankfurt.

A statement from the club provided to TopDrawer reads: “The New England Revolution Academy is a fully-funded academy investing significant resources in the development of young players,” the statement read. We communicate clear expectations and policies to all players in relation to the commitments associated with being a member of the Revolution Academy. One important policy is that (unless facilitated by the Academy) players cannot train or trial with any other clubs or programs.”

Rennicks has committed to play at the Indiana University next fall.

The University of Wisconsin School of Medicine and Public Health is launching a study of up to 3,000 high school soccer players to examine whether headgear can reduce concussions in soccer.

“The rate of concussion in girls high school soccer is 4th highest, behind only football, boys ice hockey and lacrosse, and high-school girls soccer players get concussed at almost twice the rate as their male counterparts,” said Dr. Alison Brooks, assistant professor in the UW Department of Orthopedics and Rehabilitation, Division of Sports Medicine.

Football, ice hockey and lacrosse are all sports in which players are required to wear headgear, the use of which in soccer has been controversial.

“A lot of times with concussions, you have the rotational force that causes a concussion. The headgear that soccer players wear doesn’t help prevent that anymore than not wearing anything,” Chris Carter, M.D., a family and sports medicine physician with Brookwood Baptist Health Primary Care Network at Grand River in Leeds, told ABC 33/40 reporter Brian Pia.

The UW study, which will involved 88 Wisconsin high schools, is funded by a $300,000 grant from the National Operating Committee on Standards for Athletic Equipment (NOCSAE).

High school senior Ashley Sanchez (SoCal Blues), who scored in both the 2016 U-17 and U-20 World Cups, assisted in her debut for the U.S. U-23 women's national team. Sanchez, who turns 18 on March 16, set up Boston Breaker midfielder Margaret Purce for the USA's second goal in a 2-0 win over Japan in La Manga, Spain. University of South Carolina forward Savannah McCaskill scored the first goal. Rutgers’ goalkeeper Casey Murphy made 13 saves while Japan had a 16-13 edge in shots. 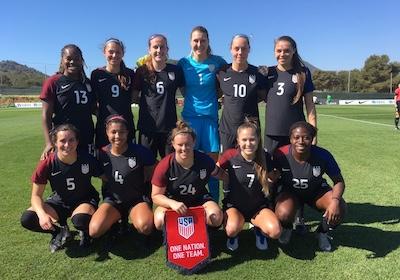