America’s biggest teenage star couldn’t get time off work to be part of the USA’s Concacaf U-20 Championship win last weekend. The 18-year-old Christian Pulisic, in Borussia Dortmund's 6-2 win on Saturday over Bayer Leverkusen in front 79,100, scored his fifth Bundesliga goal and made his fifth assist.

Pulisic was just one of several European-based players who didn't take part in the qualifying tournament for the 2017 U-20 World Cup, yet Coach Tab Ramos' team still lifted the U-20 Concacaf crown for the first time.

It clinched a World Cup berth with 2-1 win over El Salvador on Friday, and on Saturday won the final in a penalty-kick shootout win over Honduras after 0-0 tie. There was no overtime, and when they went to spot kicks, all five U.S. players converted. The first three Hondurans hit the net before Rembrandt Flores skied his attempt over the crossbar.

Brooks Lennon of Real Salt Lake led the USA in scoring with four goals in the six games of the U-20 World Cup qualifying campaign. Sporting Kansas City’s Erik Palmer-Brown, who captained Ramos’ team, marshaled a strong defense, playing in front of central defenders Justen Glad (Real Salt Lake) and Tommy Redding (Orlando City). Palmer-Brown also scored in a 1-0 win over Mexico, the USA’s first defeat of El Tri at the Concacaf U-20 level since 1986.

"I’m very proud of the team,” said Ramos, whose team opened with a 1-0 loss to Panama before the wins over Haiti (4-1), St. Kitts & Nevis (4-1), Mexico, El Salvador, and Honduras. “They ended up showing that we were the best team here.

Pulisic is unlikely to be part of Ramos squad for the 2017 U-20 World Cup that takes place in South Korea May 20-June 11. The Bundesliga ends on May 20 and Pulisic has already played 11 games for the USA’s full national team, which has 2018 World Cup qualifiers against Trinidad & Tobago June 9 and at Mexico June 13.

The other U-20 eligible European-based players who weren’t part of qualifying are more likely to be available for the U-20 World Cup. They include 18-year-olds Haji Wright, Weston McKennie and Nick Taitague, who all started for Schalke 04’s U-19 team in a 2-0 win over Arminia Bielefeld on Sunday.

Cameron Carter-Vickers and Gedion Zelalem started for Ramos’ team that reached the quarterfinals of the 2015 U-20 World Cup. Both are eligible for the 2017 U-20 World Cup but weren’t released by their clubs for the qualifying tournament.

The 19-year-old Carter-Vickers has played in four first-team games Tottenham Hotspur, two each in the FA Cup and the English League Cup, and has been on the bench for 14 English Premier League games.

Zelalem, age 20, joined Dutch second division VVV-Venlo on loan for Arsenal in late January. On Monday, he made his fourth appearance in a 0-0 tie with Jong FC Utrecht.

There’s also 19-year-old Joshua Perez, who has made one Serie A appearance for Fiorentina and has scored seven goals this season in Italy’s Primavera A U-19 league, and 20-year-old Mukwelle Akale, who has scored three goals in four appearances for Villarreal’s B team in 2017.

Ramos will have a deep pool of players to consider when he names his 21-player World Cup roster in early May.

• Palmer-Brown won the Golden Ball as the tournament’s MVP. 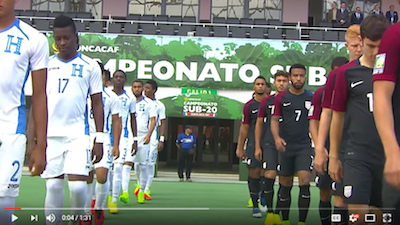