After guiding the USA to the Concacaf U-20 Championship title, Tab Ramos will coach at his third U-20 World Cup, marking his 10th world championship as a U.S. player or coach.

Ramos will hold one camp before the U-20 World Cup kicks off in South Korea May 20 while tracking the players’ progress at their clubs to determine his 21-player roster.

SOCCER AMERICA: What pleased you most about how the team performed during the qualifying tournament?

SA: What was the key to that?

TAB RAMOS: The commitment of the players to stick to a plan. Overcoming the result of the first game [a 1-0 loss to Panama] and continuing to build, I thought was really important. When we took the Haiti goal in the second game [in the 16th minute], a lot of people could have thrown in the towel. Instead, the players took it upon themselves to dig themselves out a hole [to come back for a 4-1 win.] The team just got better and better.

SA: What’s your assessment of the victory over Mexico, which had won the last three Concacaf U-20 titles?

TAB RAMOS: Overall, I was very happy with the win, but in general I thought we could have played a lot better against Mexico. Of course, we limited them to doing basically nothing, but I thought on the attacking side we could have done better. I think if we played Mexico a week later we would have played much better..

SA: Certainly the defense did well, as your opponents managed only 12 shots on target and four goals over six games. You had captain Erik Palmer-Brown, known as a central defender, playing as a defensive midfielder in front of central defenders Tommy Redding and Justen Glad, and Palmer-Brown won the tournament Golden Ball …

I’m not surprised he did a great job, being named the best player of the tournament in that position.

We only gave up three of four legitimate shots on goal. It had a lot to do with the fact that those three players down the middle [Palmer-Brown, Glad, Redding], and our outside backs Marlon Fossey and Danny Acosta, were really strong. 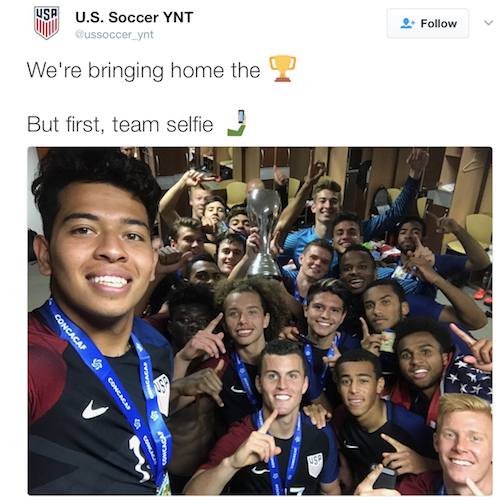 SA: Are there aspects of the team’s play that you think must be improved upon to succeed at the World Cup?

SA: A number of European-based U.S. U-20s weren’t available for qualifying. Do you know how many of them might be part of your World Cup squad?

TAB RAMOS: Our conversations with Tottenham are in a good place for Cameron Carter-Vickers to come.

Gedion Zelalem belongs to Arsenal and is just on loan [to Dutch second division VVV-Venlo]. His team is in a pretty comfortable lead to get promotion to the first division in Holland, so I think we’re going to be in a good scenario as well with him.

We would like to have Weston McKennie if he’s available. That’s a conversation I need to have with Schalke, which also has and Nick Taitague and Haji Wright. Weston is a player we definitely want on the roster and Nick and Haji are guys we still want to look at as possible players to have on the team.

Then we have Derrick Jones, who debuted in MLS for the Philadelphia Union last weekend. We filed his paperwork to get him approved for World Cup qualifying, but it was two weeks too early because his papers could only be accepted March 5 and FIFA didn’t give us an exception, so we re-applied yesterday to FIFA.

[Editor’s note: Jones is a Ghana native with U.S. citizenship who moved to Philadelphia at age 14 and joined the Philadelphia Union Academy.]

He’s a player who could potentially be important to the team if he’s doing well.

Then we have Joshua Perez, and Fiorentina has not released him much although I’ve spoken to him a lot and we’d like to have him as an option as well.

There’s a lot of things up in the air right now.

TAB RAMOS: Christian is a senior player at the moment and our senior team has really important World Cup qualifiers [vs. Trinidad & Tobago June 9 and at Mexico June 13]. I don’t think he’s a realistic option.

SA: With only one training camp between now and the World Cup, what’s the process like for picking the final roster?

TAB RAMOS: We name the 35-player provisional roster [from which 21 will be named to the final World Cup roster] pretty soon, and then we follow the 35 and see how they are performing.

A lot of these players we won’t be calling in for the camp because we hoping they’re performing for their clubs.

SA: What’s it like coaching a team of players embarking on their pro careers?

TAB RAMOS: They are at that spot where they’ve just become pros. ... They’re professional players but they haven’t really played professional games.

For a 19-year-old it’s a big deal to become a pro. But now the reality is, and this is something we speak to them about. You just became a pro. We’re really happy for you and we’re going to help you along, but the fact is that now you’re fighting against the 34-year-old man who has a family who doesn’t want to lose his spot on the roster you just got on. And that’s a really difficult place to be. Obviously you should be happy that you just became a pro. But now is where the real hard work begins.

Helping them get to that place is something my staff has done well. We ground the players and we let them know this is the time to work. This is when you have to earn, and they’ve responded well over the last three cycles.