Bruce Arena: 'We're caught up to speed' on USMNT pool

His successor, Bruce Arena, is expected to announce on Wednesday his squad for the critical World Cup 2018 qualifiers against Honduras and Panama.

The first qualifiers of the year in the Hexagonal always pose a challenge for the USA as MLS is just starting. Arena said the first weekend of play in MLS was no surprise. 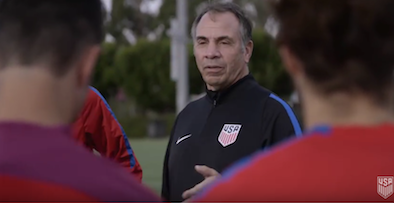 "It's like the opening part of every season in every league," Arena said after the Gold Cup groups were announced earlier this week. "Teams aren't fully fit, they're not fully coordinated, there's very little combination play. It's the same with every league around the world as they open their seasons. MLS is no different. It's going to take all of our teams some time to really move forward and have our teams looking a little sharper."

Those issues put extra importance on the form of the players playing abroad. Fortunately, many U.S. players in Germany and Mexico have been playing well.

“There have been real positive weeks with Fabian Johnson and Christian Pulisic, Bobby Wood and John Brooks. Timmy Chandler has been playing consistently as well,” he said of the German-based group. “It’s good in England to see Geoff Cameron played this past week, so that’s encouraging. Omar Gonzalez in Mexico has played consistently. We have some players at Tijuana that have been playing on a regular basis. We have an interesting pool of players to consider for these games in March.”

Arena will announce a group of about 25 players on Wednesday, but he admitted there could be changes after the following weekend.

"We're caught up to speed with everyone in our pool," he said. "We have a pretty good understanding of what we're going to do. We still have a couple of weeks still to play out and [hope] no crazy things happen in the short period of time. So before we can finalize out roster we have to see players get through these next couple of weeks healthy and see if some make progress and that will help determine whether we can utilize some of the Major League Soccer players."

When pressed about the players whose progress he will monitor, Arena would not elaborate, but two players returning from long layoffs are the two players he had on his World Cup 2006 team: Clint Dempsey and Tim Howard.

“It was great to see him play in the opening game in Houston for Seattle,” Arena said in a Facebook chat of Dempsey, who is playing again after missing the last three months of the 2016 MLS season with a heart ailment. “I want to follow him again this weekend and really see where he’s at physically -- if he’s getting a little bit sharper, if he’s increasing his workload on the field. We know he’s obviously a very good player and has a great history with the national team."

With Jozy Altidore, Bobby Wood and others available up front, Arena doesn't need to rush Dempsey back into the team.

“But we want to be smart about Clint," added Arena, "and make sure he’s ready to play international soccer. The next two weekends are going to be very important so we’ll follow him closely but I’m happy to see he’s back on the field and I’m confident he’ll be part of the national team at some point in 2017.”

Brad Guzan and Nick Rimando look set to get call-ups in goal, and Arena will be looking to see if Howard, out since being injured in the Hexagonal opener against Mexico in November, plays Saturday when the Colorado Rapids travel to the New York Red Bulls.

"If he’s healthy and continues to make progress," said Arena, "he’ll obviously get strong consideration for the call-ups in March.”

Two positions in the state of flux are right back (where Chandler is suspended for the Honduras game and DeAndre Yedlin is nursing a hamstring injury) and left back (where half a dozen players are being looked at), and a lot will be known about Arena's plans when he decides on a position for Johnson.

“My thoughts on Fabian [are] simply this," Arena said in his Facebook chat. "He plays on a regular basis as a left-sided midfielder at Moenchengladbach, and if we can, we want to play Fabian in the midfield. So that’s obviously one of our goals in 2017, is to find a position for him and allow him to play it on a consistent basis.”

At left back, Jorge Villafana impressed in the second friendly against Jamaica in early February, but he was only available because he isn't starting for Santos. Arena did say he watched Villafana in Santos' Copa MX match against Club America and he noted he played very well.

Other options include Greg Garza and DaMarcus Beasley whom he had in January camp, Matt Besler, who started the first two Hex games at left back but missed January camp after undergoing ankle surgery, and Tim Ream and Eric Lichaj, who both play in the English League Championship.