Seeded USA gets favorable draw for U-20 World Cup

The USA, which earned a seed for the 2017 World Cup, was drawn into Group F, with Ecuador, Senegal and Saudi Arabia. Of the three first-round foes, only Senegal, a 2015 semifinalist, has ever advanced past the round of 16 in previous U-20 World Cups.

"We are proud to have earned a group top seed for the 2017 U-20 World Cup," U.S. coach Tab Ramos said. "As Concacaf Champions and 2015 U-20 World Cup quarterfinalists, we have put ourselves in a great position for this tournament. Our youth national team program has been on an upward trend and we need to continue to push forward in Korea Republic. This was a difficult draw, but we are ready for the challenge. Our plan is to treat each game like a final, so our preparation now shifts to Ecuador."

The USA, which faces South American runner-up Ecuador on May 22, Africa runner-up Senegal May 25 and Asia runner-up Saudi Arabia May 28, qualified by winning the Concacaf U-20 Championship in early March, beating Haiti, St. Kitts & Nevis, Mexico, El Salvador and, in the final, Honduras.

The USA lost in the quarterfinals on PKs at the 2015 U-20 World Cup to eventual champion Serbia, which did not qualify for the 2017 U-20 World Cup. The USA’s best finish in the biennial tournament launched in 1977 was fourth place in 1989 in Saudi Arabia. 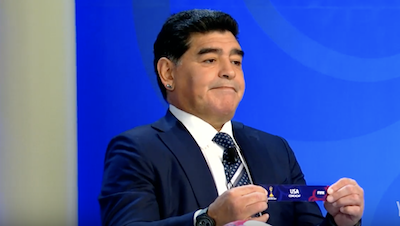 Diego Maradona helped out at the draw in Suwon.

USA OPPONENTS
Ecuador
• Previous appearances: 2001 (round of 16), 2011 (round of 16).
• 2015 U-20 World Cup: did not qualify
• Qualifying: Finished runner-up as host to Uruguay. Its nine games included two wins over Colombia (4-3 and 3-0), a 3-0 rout of Argentina and a 2-2 draw with Brazil. As host, Ecuador had an edge by playing its games at high-altitude venues.
• Key player: Midfielder Bryan Cabezas moved to Italy's Atalanta last year after making 68 appearances for Independiente del Valle, for which he played in the 2016 Copa Libertadores final. It finished runner-up to Colombia's Atlético Nacional.

Coach Jaime Frias’ second camp of 2017 for the U.S. U-16 girls national team takes place March 18-25 at the Chula Vista Elite Athlete Training Center in San Diego with 24 players born in 2002. Fifteen of the players attended the first camp of the year in January.

U.S. U-16 boys prep for France in Florida

Ten of the players are returnees from the U-16s' early February trip to Argentina with a 21-player roster.

* Returnees from February trip to Argentina.

Gretchen Reynolds in The New York Time: Slipping into a bathtub filled with frigid water after a hard workout has long been routine for many athletes, who have believed that the chilly temperatures will reduce inflammation in their tired muscles and help their bodies to physiologically recover more quickly from strenuous exercise. But a new study finds otherwise, reports Reynolds, citing research by Queensland University of Technology in Australia that appeared in the Journal of Physiology. Cellular evidence suggests that a cold bath may do little for heavily exercised muscles except chill them. Dev Mishra wrote about the ice bath fad for the Youth Soccer Insider last July: Taking the ice bath plunge for muscle soreness -- helpful or not?