Goalkeeper Jonathan Klinsmann, who was awarded the Golden Glove while starting for the USA in its Concacaf U-20 Championship title win earlier this month, is training at VfB Stuttgart, where his father Jurgen  starred as a striker in 1984-89. 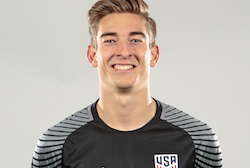 Klinsmann, a sophomore at Cal Berkeley, is training with the VfB’s U-23s to help him prepare for the U-20 World Cup in South Korea May 20-June 11.

“Good training under the best conditions can never hurt,” Jurgen Klinsmann, who grew up in the Stuttgart suburb of Göppingen, told VfB’s official web site. "I am very grateful to VfB for arranging this on short notice. As a plus, Jonathan has a very good contact with the family."

Asked for assessment of his son’s first outing, the former U.S. coach said, “I keep myself completely out of it. He is a goalkeeper — and others can judge him better than I. When I saw him after the training, he seemed satisfied.”

In 2014, Jonathan Klinsmann trained with VfB’s U-17s and U-19s. His return has German media speculating whether he’s considering going pro, while pointing out that he would not require a transfer fee. Jurgen Klinsmann said that because of the Golden Glove award, “Naturally, phone calls come from clubs. But there’s no stress at all. We’ll see.”