You can never relax while driving and the same is true when officiating a soccer game. Years ago, I heard many officials say, “I’m just a linesman,” and a new crop of officials say “I’m just an assistant referee” when given an assignment not in the middle. Although the term for that official might have changed, unfortunately the attitude of some officials has not as it’s a privilege to be given an assignment, no matter where you are on the field.

Law 6 is now about “the other match officials,” including the assistant referee. They assist the ref with offenses and infringements when they have a clearer view than the referee. In many cases, they will be able to spot off-the-ball fouls committed behind the ref’s back. It’s crucial to get this call correct. 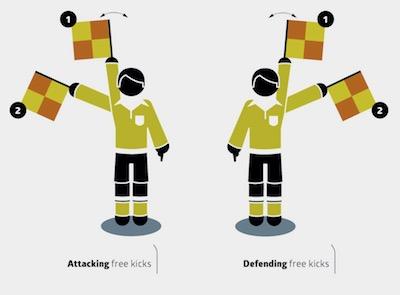 A few years ago, I was refereeing a girls U-15 premier game that went south very quickly midway through the first half. I wound up having to caution four players the rest of the half, which eventually calmed things down, and the teams solely concentrated on playing soccer in the second half. Credit to the coaches who told their players at halftime just to concentrate on the game.

At halftime, I asked the AR’s if they had any idea what was the issue in this game. One AR said, “After play moved upfield, blue No. 11 elbowed white No. 4, 20 yards behind your back.”

These were two of the players who I cautioned later in the half. As I had given pre-game instructions to the AR’s to watch for fouls behind my back and inform me if they saw them, I asked the AR why he did not follow instructions. He said, “What was I supposed to do? You were 40 yards from me running upfield.” The problem was his attitude of “I’m just an AR.”

This is the perfect scenario when electronic communication among officials would have worked. After cautioning or sending off blue No. 11 (which would have been determined by what the AR thought as he had seen the incident), the game would have calmed down right there.

But not every game has two assistant referees. There’s a bit of a trick for refs to follow to spot off-the-ball fouls, whether you are blessed with having good ARs or not. Just after the ball is kicked, continue to watch the action there for a second or so. There is more chance of a bad foul occurring at the spot of the kick than with the players upfield jostling for position as the ball is travelling. Especially if the ball is in the air and has not arrived to where it’s going to.

If the ref whistles an off-the-ball foul, chances are very few on the field saw the same thing as they were watching the ball. The ref will often be questioned, “What happened?” and “What are you calling?” This is the time for the ref to give a brief explanation to what had occurred.

During the course of my career, I’ve had to whistle many fouls of players who continued their tackle into opponents after the ball was kicked. As well as dealing with those fouled retaliating a second later. The color of the card was determined by the severity of the contact and whether it was a deliberate action.