In the age of academies, pre-academies, soccer classes for 18-month-olds and curricula demanding coaches precisely plan practices for 6-year-olds, you don’t hear much talk about free play and street soccer anymore.

But ask U.S. national team left back and MLS champion Jorge Villafana about his youth soccer experience and a big smile comes to his face.

“I’ll never forget those days, playing on the streets,” said Villafana a couple days before the USA World Cup qualifier against Honduras. “That’s how I started learning soccer.” 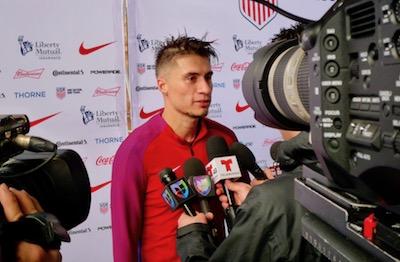 Now 27, Villafana was born in Anaheim, California. At age 1, he and his mother moved to Mexico to live with her extended family after his parents separated. When Jorge was 7, his mother moved back to the USA so she could work and send funds to support the family while Jorge was cared for by his aunt and grandfather.

In Penjamo, a town of 40,000 in the state of Guanajuato, Villafana played daily in the streets with friends and cousins of a wide range of ages. The adult members of his family were baseball fans, but it was soccer that enchanted Jorge.

“There weren’t a lot of cars,” he said. “But every time a car came, you had to grab the ball and wait for them to pass by. Those are good childhood memories.”

He joined an indoor soccer team, but the majority of his soccer-playing was without adults around until at age 15 when he moved back to California, where he played for Anaheim High School and the youth club Juventus.

“I liked the shirt,” he said, referring to the feline face that adorns the jerseys of the Mexico City team.

He didn’t know much about MLS until he saw ads for a nationally televised talent search tryout: Univision’s “Sueno MLS.” Out of 2,000 hopefuls, Villafana, who then went by his paternal surname, Flores, came out on top and earned a spot on Chivas USA’s academy team.

Villafana spent nine seasons in MLS, the final two with the Portland Timbers, which he helped win MLS Cup 2015. After the 2015 MLS season, he got an offer from Santos Laguna.

“I could not say no,” he said. “I always dreamed of playing in Liga MX. … I moved from a cool rainy city to the desert, but that’s no problem. It's the kind of adjustment that’s part of the job.”

Last weekend he played for Santos in a 1-1 Liga MX tie with Tijuana Xolos before arriving in San Jose, California, to begin his quest of helping the USA qualify for the 2018 World Cup.

Only three players on the roster -- members of the USA’s 2016 U-17 Women’s World Cup team, defenders Kiara Pickett and Emily Smith and midfielder Sydney Zandi -- are returnees from the U-23s’ January camp. But the January U-19 roster included several 1998-born players and 19 players from that roster traveled to La Manga, Spain, with the U.S. U-20s in early March. There are two collegians on the roster -- defender Sinclaire Miramontez of Nebraska and forward Emily Madril of Florida State – with the rest playing for their youth clubs.

Youth clubs hooking up with pros

“Over the last several years, the Rowdies’ focus has been to create a successful business model for both the first team players on the field and the stadium experience for the fans,” Rowdies COO Lee Cohen said. “We feel as if we are now prepared to focus on the next steps of our soccer evolution in the Tampa Bay Area. Partnering with TBU and making that club part of our family as the TBU Rowdies was, in our minds, the most logical next step.”

“This truly is an historic partnership,” said North Carolina FC owner Steve Malik. “We now have a soccer pyramid from youth recreational leagues up to the highest level of men’s and women’s professional soccer in North Carolina. North Carolina FC Youth will be home to more than 13,500 youth players and will be a key positive differentiator in our already strong Major League Soccer bid.”